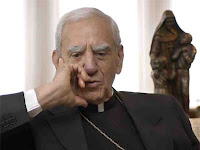 Speaking of sexual abuse by priest, in a positive development a Philadelphia court has ruled that retired Roman Catholic cardinal Anthony Bevilacqua (pictured at right) is competent and his recent deposition testimony can be used at an upcoming priest abuse trial. The Church had endeavored to argue that Bevilacqua suffered from dementia and that, therefore, he could not be deposed or called as a witness. As noted previously, legal counsel for Monsignor William Lynn who has been formally indicted have suggested that Lynn did not intend to take the fall for the Archdiocese when his actions had been directed by his superiors, one of whom was Bevilacqua. Obviously, catching Bevilacqua would be delicious. Here are highlights from the Philadelphia Inquirer:

Sarmina first ruled Bevilacqua legally competent in late November after a two-day private hearing at which the cardinal, who retired in 2003, was questioned by the judge, Bergstrom, and a prosecutor. Bergstrom subsequently renewed his motion to disqualify Bevilacqua from testifying.

Lynn, 61, was secretary for clergy for 12 years under Bevilacqua, beginning in 1992. As such, he was responsible for pastoral assignments and disciplinary actions against priests. Prosecutors have argued that Lynn's decisions involving pedophile priests were part of a long-standing practice in the Archdiocese of Philadelphia of transferring deviant priests to new, unsuspecting parishes.

Assistant District Attorney Patrick Blessington argued Monday that Bevilacqua's memory problems would be no more problematic for a jury than a hostile witness who refuses to submit to defense questioning.

In other developments, Sarmina promised to rule by Monday on whether prosecutors may introduce evidence at trial about other incidents of priests in the archdiocese sexually abusing altar boys and other children.

Prosecutors insist such evidence is necessary to help the jury understand how pedophile priests were able to prey on their young parishioners and, after being exposed, get transferred to new parishes to repeat the conduct.