The Inquisition - The Precursor to the Police State 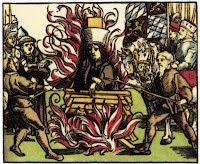 I often note that throughout history, religion has been one of the causes of more deaths and misery than just about any other cause. Yes, there were plagues and pestilence, but deaths arising from conflicts over religion, including the rigid enforcement of religious dogma, have always been elective as opposed to naturally occurring. And but for religion - and the oft related goals of power control and, most of all, money - these deaths need not have occurred.

While wars of religion date back probably to the near dawn of history, one institution took religious reigns of terror to their peak and set the template in many ways for modern police states and totalitarian regimes. The institution likewise justified torture as a supposed furtherance of what was good and "holy." The institution? The Catholic Church's infamous Inquisition. An institution which continues to exist this very day under the name " The Congregation for the Doctrine of the Faith." Even more frightening, until his election as Pope, Benedict XVI presided over this institution. A piece in the New Humanist based in the United Kingdom looks at the Inquisition and the dangers that arise from religious certitude - a characteristic all too prevalent amongst today's Christianists. The piece also looks at how the Inquisition created the mindset of today's police states. Here are some highlights:

Just inside the gate, at Piazza del Sant’Uffizio 11, stands a Renaissance palazzo with a ruddy ochre-and-cream complexion. This is the headquarters of the Congregation for the Doctrine of the Faith, whose job, in the words of the Apostolic Constitution Pastor bonus, promulgated in 1988 by Pope John Paul II, is “to promote and safeguard the doctrine on faith and morals throughout the Catholic world”. Pastor bonus goes on: “For this reason, everything which in any way touches such matter falls within its competence.” It is an expansive charge.

But before the Congregation became the Holy Office, it went by yet another name: as late as 1908, it was known as the Sacred Congregation of the Universal Inquisition. Lenny Bruce once joked that there was only one “the Church”. The Sacred Congregation of the Universal Inquisition was the headquarters of the Inquisition – the centuries-long effort by the Church to deal with its perceived enemies, within and without, by whatever means necessary, including the most brutal ones available.

The palazzo that today houses the Congregation was originally built to lodge the Inquisition when the papacy, in 1542, amid the onslaught of Protestantism and other noxious ideas, decided that the Church’s intermittent and far-flung inquisitorial investigations needed to be brought under some sort of centralised control – a spiritual Department of Homeland Security, as it were. The Inquisition had begun in the Middle Ages, to deal with Christian heresies, and been revived in Iberia, under state control, to deal with Jews and Moors.

The Congregation for the Doctrine of the Faith inherited more than the Inquisition’s DNA and its place on the organisational charts. It also inherited much of the paper trail. The Inquisition records are kept mainly in the palazzo itself . . . .

[C]onsider what an inquisition – any inquisition – really is: a set of disciplinary procedures targeting specific groups, codified in law, organised systematically, enforced by surveillance, exemplified by severity, sustained over time, backed by institutional power and justified by a vision of the one true path. Considered that way, the Inquisition is more accurately seen not as a relic but as a harbinger.

Whatever the number killed, the Inquisition levied penalties on hundreds of thousands of people, and the fear and shame instilled by any individual case rippled outward to affect a wide social circle. Little wonder that the Inquisition has left such a lasting imprint.

Here’s the central question: why did the Inquisition come into being when it did? Intolerance, hatred and suspicion of one group by another had always existed. Throughout history, these realities had led to persecution and violence. But the ability to sustain a persecution – to give it staying power by giving it an institutional life – did not appear until the Middle Ages. Until then, the tools to stoke and manage those embers of hatred did not exist. Once the tools do exist, inquisitions become a fact of life. They are not confined to religion; they are political as well.

The tools are these: there needs to be a system of law, and the means to administer it with a certain amount of uniformity. Techniques must be developed for conducting interrogations and extracting information. Procedures must exist for record-keeping, and for retrieving information after records have been compiled and stored. An administrative mechanism – a bureaucracy – is required, along with a cadre of trained people to staff it. There must be an ability to send messages across significant distances, and also an ability to restrict the communications of others – in a word, censorship.

Interrogation manuals, like the famous Practica written by Bernard Gui, were drawn up to instruct inquisitors on how to question the accused – the tricks to use, the psychology to employ. The resemblance to the modern manuals for military personnel and intelligence operatives is hard to miss. As a supplement to interrogation, torture became systematic – subject to rules, perhaps, but rules that proved elastic, as they always do.

So the tools were new. The precipitating mindset was age-old: the conviction that one is absolutely right. Cardinal Alfredo Ottaviani, the prefect of the Holy Office through most of the 1960s, adopted as his motto the Latin phrase Semper idem – “Always the same”. The inquisitors shared an outlook of moral certainty. In a world of moral certainty, the unthinkable becomes permissible. The sanctity of private conscience is no longer deemed inviolate. Techniques for ensnaring the innocent in scenarios of scripted guilt become increasingly sophisticated.

[T]he desire to control the thoughts and behaviour of others – joined to a belief that God or history will render an approving judgement – underlies much of the sad narrative of the past hundred years: the police states, the dirty wars, the ethnic cleansing, the internments, the renditions, the Red Scares, the fatwas, the special prosecutors, the electronic surveillance, the encroachments accomplished in name of national security.

Persecution acquired a modern platform – the advantages afforded by a growing web of standardised law, communications, administrative supervision and controlled mechanisms of force. It was run not merely by warriors but by an educated elite; not merely by thugs but by skilled professionals. Every subsequent outbreak of persecution, political or religious, has been abetted by these same forces. . . . Through the lens of the Inquisition we can glimpse the world we inhabit now.

When the Inquisition’s palazzo was built, in the mid-16th century, the Pope ordered words to be carved in a marble scroll over the front door – a kind of mission statement – establishing the building as a “bulwark against heretical depravity”. The words are gone now, removed by French troops during Napoleon’s occupation. It’s easy enough to remove some words – harder to erase a legacy.

As noted in previous posts, what is disconcerting is that in the USA, the laws have been amended to reduce civil liberty protections and place more arbitrary power in the hands of the government with little means to hold the government accountable. Were religion to ever become fully entwined with government as is the goal of the Christianists, the outcome could be frightening indeed.
Posted by Michael-in-Norfolk at Sunday, January 29, 2012