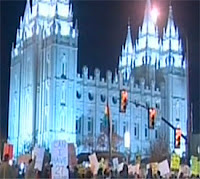 Mitt Romney's Mormon faith is continuing to haunt him on the campaign trail, particularly among the knuckle dragging Christianist elements of the Republican Party base. Some 25% or more have said that they would not vote for a Mormon to be president. Clearly, religious based discrimination is alive and well in America, the land of supposed religious freedom. However, an op-ed in the Washington Post puts some of the blame for this anti-Mormon mindset squarely at the feet of the often unforgiving and unwelcoming Mormon Church which, like the leadership of the Catholic Church talks a good game of Christian love but then acts in decidedly unloving if not morally bankrupt ways. And then there's the Mormon Church's tendency to trample on the religious freedom of others as demonstrated by its role in the passage of Proposition 8. Sometimes you reap what you sow. Here are some column highlights:

There has been much talk recently about whether America is ready for a Mormon president. This tolerance question should cut both ways. Nearly a quarter of Americans told Gallup last summer that they wouldn’t vote for a Mormon president, which is unfortunate since former governor Mitt Romney and former candidate Jon Huntsman are both smart, capable men.

[T]he church isn’t exactly welcoming of outsiders. Mormons account for 57 percent of Utah residents yet some 91 percent of Utah state legislators self-identify as Mormons. The state that’s home to the Church of Jesus Christ of Latter-day Saints has elected only two non-Mormon governors in nearly 116 years and has sent just one non-Mormon to Congress in the past five decades.

Mormons love families. But the family-values facade applies only if you stay in the fold. Former Mormons know the family estrangement and bigotry that often come with questioning or leaving the church. The church I was raised in values unquestioning obedience over critical thinking. This caused trauma and cognitive dissonance when I questioned church doctrine and official history.

I struggled after realizing that Mormonism’s claims about anthropology, history and other subjects contradict reason and science. While many faiths’ irrational claims are obscured by centuries of myth and rubble, the LDS church lacks the moderation and scholarship of its older peers. It also stifles efforts to openly question church pronouncements, labeling such behavior as satanic.

Critics of Mormonism include geneticists, Egyptologists and even the Smithsonian Institution, which stopped Mormon apologists from claiming the institute viewed the Book of Mormon as a factual document.

I spiritually imploded after learning these things and other facts outside official church curriculum. Disturbed, I met with a high-ranking Mormon leader who told me to quit reading historical and scientific materials because they were “worse than pornography.” BYU’s dean of religious education wouldn’t answer my growing list of questions.

Salt Lake City’s male gerontocracy told me to avoid books and marry, but I could not stomach all their teachings. For example, mainstream Mormons banned polygamy in 1890 to obtain Utah’s statehood, but they continue to perform temple ceremonies that “seal” one man to multiple women in the hereafter.

Non-Mormons are not allowed to attend family members’ weddings in Mormon temples. Many gay Mormons have been driven to suicide, deeply conflicted about whether acting on their sexuality is, as the church teaches, a sin.

With public interest in Mormonism so high, I hope the scrutiny will help break down the church’s fundamentalist trappings: secrecy about its finances, anti-women doctrine and homophobia, to start. Perhaps someday the church will not excommunicate, fire and demote people who want honest, church-wide dialogue about Mormon history and doctrine.

In many ways, the writer's lament could apply to Catholicism and many fundamentalist denominations as well. If you want to be accepted, you need to be accepting. In addition, at some point it becomes necessary to stop refusing to face the fact that history and scientific knowledge can no longer be ignored.
Posted by Michael-in-Norfolk at Monday, January 30, 2012