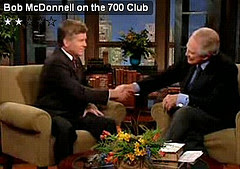 Virginia Governor Bob "Taliban Bob" McDonnell and his fellow Christofascists in the Republican Party of Virginia are striving to make abortion unavailable - even if not technically illegal - in Virginia. The excuse for implementing new clinic regulations to force the closure of clinics is always couched in terms of "safety" and "protecting women." The latest GOP effort in the General Assembly is to require women seeking an abortion to have an ultrasound within 24 hours before the abortion procedure. Truth be told, neither McDonnell nor the Republican Party of Virginia give a rat's ass about the health and safety of women - or not those outside their own families.

Democrat Senator Janet Howell recognizes hypocrites when she sees them. Therefore, she sought to underscore the dishonesty and hypocrisy of the GOP ploy by introducing a proposed amendment to the GOP bill pending in the Virginia Senate. What was it? That before men can receive a Viagra of Cialis prescription, they would have to undergo safety related exams: a rectal exam and a cardiac stress test given the dangerous health risks these drugs can trigger. Here's a video of the proposed amendment being read and Janet's explanation of her reasons for her amendment:

I've known Janet for a number of years and she's a class act. Not to mention smart and tenacious. And a great ally to LGBT Virginians. Should Bob McDonnell be considered for a VP nod, I sincerely hope that the public learns more about his far right extremism and the nastiness of his GOP buddies in Virginia.
Posted by Michael-in-Norfolk at Wednesday, February 01, 2012