Confession of a Gay Catholic 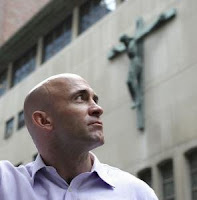 The Boston Globe has an article on a new book titled "Since My Last Confession" which looks at the Roman Catholic Church's hypocrisy towards gay Catholics. While the author of the article shows his ignorance/bias by using the term "lifestyle choice," I hope the article nonetheless helps draw attention to the book and the larger issue of how the Church mistreats gays - even though all the while it continues to coddle and protect those bishops and cardinals who enabled and/or covered up sexual abuse of minors by priests. Hopefully, the book's author, Scott Pomfret, will find a new church home outside the Roman Catholic Church which I believe is beyond saving in terms of its official attitudes towards gays anytime within the next 50-100 years. Only when enough of the laity has "voted with its feet" and revenues drop significantly will the Vatican suddenly find a new revelation that alters the Church's official line. Here are some story highlights:
*
Blocks from his former church in Downtown Crossing, Scott Pomfret takes a deep breath and confesses his literary sins. "My real sin was not having the proper amount of discretion," says Pomfret, a Boston attorney who recently wrote a gay Catholic memoir called "Since My Last Confession," which has ruffled some frocks at St. Anthony Shrine. Pomfret served as a lector at the church for eight years before officials there let him go in September because of his other role as an erotica fiction writer.
*
The church's executive director, the Rev. David Convertino, told the Globe and other local media that some people had concerns about Pomfret's role at the church. Weeks later, Pomfret still reels from the ouster. He's searching for a new church but doesn't regret writing his book, which took him three years to finish. After Massachusetts legalized gay marriage in 2004, Pomfret decided to chronicle how he balances his spiritual life with his gay one.
*
Much of the book centers on St. Anthony's Shrine, where Pomfret read Scriptures for Friday night Mass and led a gay and lesbian spiritual support group. In the book, Pomfret also pokes fun at local clergy - suggesting that some were sexually active - and criticizes Cardinal Sean P. O'Malley, the archbishop of Boston.
*
"I want people to understand that at the grassroots church level, there is room at the table for gay people," he says. "I don't want people to throw spirituality away with bath water. I'd like to see them feel that faith can be part of their lives."
Posted by Michael-in-Norfolk at Monday, December 01, 2008