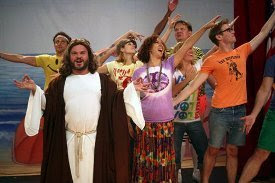 The self-serving double standards of the Christianists never cease to amaze me. They feel that they can freely tell every conceivable lie about gays, distort legitimate research and selectively pick and choose which Bible passages to apply literally and which ones to pretend are non-existent, but the minute someone highlights their hypocrisy they get all pissy. A case in point is the reaction to “Prop 8: The Musical” which is a parody of the opponents of gay marriage. From what I've seen, most of the comments about Christianists and their lies and inconsistency when it comes to Biblical interpretation/application are true. Nonetheless, the fundies at CNSNews.com have their panties in knots over the play. Here are some highlights of the crocodile tears being generated:
*
(CNSNews.com) – A Christian group is calling for an apology from Hollywood celebrities who starred in a musical that it says mocks Christians, defames Christ, and distorts the teaching of the Bible. . . . The video stars actor Jack Black - who plays Jesus – Neil Patrick Harris, John C. Reilly, Andy Richter, Maya Rudolph, Margaret Cho, and Rashida Jones, among others.
*
"Jack Black should remember from his days at Hebrew School that homosexual acts aren't funny and are roundly condemned in the Bible," Dr. Gary Cass, of the Christian Anti-Defamation Commission, said in a statement. John C. Reilly plays a “hate”-spreading religious zealot, who asks Jesus, “Doesn’t the Bible say these people [gays] are an abomination?” “Yeah, but you know, it says the exact same thing about this shrimp cocktail. Leviticus says shellfish is an abomination,” Black says as Jesus. “The Bible says a lot of interesting things like you can stone your wife or sell your daughter into slavery.
*
“Well we ignore those verses,” Reilly’s character says. “Well, then friend, it seems to me you pick and choose. Well, please choose love instead of hate. Besides your nation was built on separation of church and state,” Black says in response.
*
“Appearing as a sarcastic, rotund Christ, Black distorts the Bible and condones shameful, homosexual acts. Associating Christ with perverse activity is an affront to all people of faith, especially Christians. Apparently Black and company find it hilarious to falsely accuse Christians while they intentionally distort the Bible. Black ought to apologize," Cass said.
*
Pardon my French, but Mr. Cass is an ass. If anyone tortures the Bible to malign and denigrate others, it is the good folk like Cass and like minded Christianists. If the truth hurts, perhaps he/they need to take a good look at themselves in the mirror. As long as they tell lies about me and other LGBT individuals, I will continue to do all I can to tell the unvarnished truth about them.
Posted by Michael-in-Norfolk at Thursday, December 04, 2008

It is amazing to me that the "christians" can't or won't see truth when it point blank, slaps them in the face. WWJD indeed! I think we just found out.

It is amazing to me that the "christians" can't or won't see truth when it point blank, slaps them in the face. WWJD indeed! I think we just found out.

This is hilarious! Here is the link to watch it.