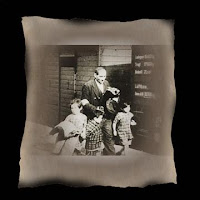 It was only a matter of time before other nutcases picked up the storyline being put out by MassResistance based on the recently released Massachusetts Department of Health report that I mentioned the other day. Now a Florida doctor, Dr. Richard Swier, is suggesting that since LGBT individuals reported - remember, this was a self reporting survey and NOT a controlled clinical study - higher incidences of certain health issues, the solution is to "eliminate" the number of gays. Here's what Herr Doctor had to say:
*
Researchers found that in many cases the disparities were even greater for bisexuals than for gay/lesbians when compared with their heterosexual counterparts. Dr. Kerith Conron, Research Fellow, Harvard School of Public Health and lead author of the report, said, "This report identifies major health disparities faced by lesbians, gay men and bisexuals. Bisexuals particularly face greater health disparities in the areas of mental health and violence victimization. Specific interventions should be developed to work with the bisexual population in these areas.
*
"Health officials also hope that the report will stimulate further study on ways to reduce and eliminate health disparities faced by gay, lesbian and bisexual people.
*
For the full study go here.
*
Reduce and eliminate health disparities? How about we eliminate gay, lesbian and bisexual behavior? Perhaps the Department of Health, Governor and Legislature should create strategies to reduce the number of gays, lesbians and bisexuals. That would solve this health crisis. Perhaps the media will give this lifestyle the same negative publicity they give smoking and obesity.
*
Hmm, let me see. A number of reports have shown Southern Baptists to have the highest obesity rate of any denomination and that evangelical Christians tend to have lower education/intelligence levels. Applying Herr Doctor's analysis, does that mean we would be wise to "eliminate" the number of Southern Baptists and evangelical Christians? (I know, it is an attractive concept) One of the most hypocritical things the Christianists do is to unrelentingly make life a living Hell as possible for LGBT citizens and then condemn us for the mental health and emotional consequences of their jihad. Since sexual orientation is not a choice and appears to be biological/genetic, how would Herr Doctor propose to reduce the number of LGBT individuals? I can think of only one way - these folks are truly hateful.
*
Here's more information on Herr Doctor via Matt Comer:
*
Swier is a retired Army Lieutenant Colonel. He currently serves on the board of the Community Foundation of Sarasota County and an advisory committee of the county school system. In the past, Swier has twice chaired the Sarasota Better Business Council and once sat on the board of the Greater Sarasota Chamber of Commerce. He is the president of the Sarasota County Veterans Commission and was appointed chairman of the Sarasota National Cemetery Advisory Committee by Republican Congressman Vern Buchanan.
*
Looks to me like Herr Swier needs to be removed from any involvement with the public school system in light of his Nazi like mentality. One can only shudder at the atmosphere that he must seek to create for LGBT students.
Posted by Michael-in-Norfolk at Friday, December 05, 2008

There is substantial public support in the US for eugenics - although most people are smart enough not to use the word "eugenics." Whether it is gays, criminals, the terminally ill, Downs syndrome fetuses, or other groups, lots of people believe that we'd be better off without them. You are right, this is neo-nazism, and must be resisted wherever it is found.