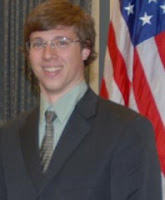 UPDATE: James Richardson dropped me a note - for clarification, he's the FORMER RNC Online Communications Manager.
*
While I do not hold out a lot of hope that the GOP will regroup and exile the nutcase Christianists back to the wilderness any time soon, perhaps a few folks are waking up to the fact that the Christianists' anti-gay jihad is not selling well with the non-Kool-Aid drinking portion of the population. A case in point is the Republican National Committee’s Online Communication Manager, James Richardson (pictured at left) who has authored a blog article that must have Daddy Dobson and like-minded homophobes writhing on the floor in fits. Richardson's heresy? Stating that just maybe the GOP needs to put aside gay bashing and move forward with the rest of modern society. As for the initial question he asks, in my opinion, the answer is that "protecting the family" has never been the real agenda of the Christianists. Here are some highlights from Richardson's article:
*
Is the fight to preserve the traditional American family – think the Cleavers meet the Bradys – one to, as its proponents argue, protect children, or is it means by which to silence the “radical gay agenda” in the United States through institutionalized shame? Cindy Lederman, a Miami-Dade circuit judge, is convinced it’s the latter.
*
Lederman’s landmark ruling, a move likely to elicit Prop 8-like responses, noted the inherent hypocrisy in Florida state law allowing gay men and women to be foster parents, but not legally adopt, further rejecting the notion that there is “a supposed dark cloud hovering over homes of homosexuals and their children”: It is clear that sexual orientation is not a predictor of a person’s ability to parent. A child in need of love, safety and stability does not first consider the sexual orientation of his parent. The exclusion causes some children to be deprived of a permanent placement with a family that is best suited to their needs.
*
Florida’s indefensible ban dates back 31 years to Anita Bryant’s “Save our Children” crusade. On the day of its passage, freshman Sen. Don Chamberlin of Clearwater asked of his colleagues: “Will we sleep better knowing we have institutionalized shame for those who have already felt shame?
*
My support for gay adoption will surely be met with hostility and, no doubt, charges of RINO’ism by many of my colleagues, but the Grand Old Party is at a crossroads and now is not the time for an echo chamber. Homosexual demagoguery is not the answer to the Party’s woes. . . And as Daniel Blatt notes, gay-hostile rhetoric no longer resonates in suburban areas with soccer moms, many of whom have gay friends or family members, and plays even worse with young voters, 61% of which voted against stripping gay couples of the right to marry.
*
To my dissenters, let me be clear, I am not advocating some sort of radical “judicial activism.” I maintain that judicial resolution to these matters (adoption, marriage, etc) typically leads to protracted and bitter legal battles, but, what is perhaps equally as distressing is our collective failure as a Party to hold a candid discussion on the emerging role of gays in the Party and society at large – not as outcastes, but as equals.
*
I recognize the Republican Party is “pro-family” party, and as such supports traditional policies, but are these traditional policies benefiting us moving forward with non-traditional demographics? As this Greenberg Quinlan Rosner Research poll reveals, young evangelicals display generational differences on key social issues, namely gay marriage — 66% supported such measures. Those are evangelicals, my friends, not libertarians.
Posted by Michael-in-Norfolk at Tuesday, December 02, 2008