College May Become Unaffordable for Most in U.S. 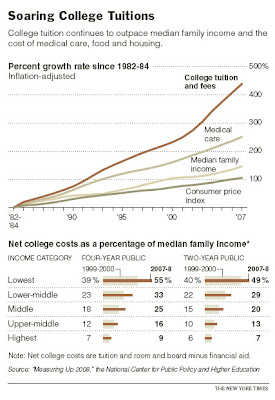 Further adding to the darken outlook for things in the USA is a new study that reflects that going to college may soon be difficult if not impossible for most Americans. Yet another gift from the GOP's focus on helping the rich and f*cking over everyone else while gay bashing whenever possible. I hope Daddy D is happy. I'm certainly not and thinking Americans should be livid. With lending dried up, even parents who might otherwise take out equity lines against their homes are likely to find this financing route unavailable. The effects of eight years of misrule just continue to keep on multiplying. It's a sad reality, but the GOP and the Christianists refuse to see that investing in the nation's population and youth are necessary for the country's long term prosperity. Focusing solely on cutting taxes and reducing programs is shortsighted at best. Here are highlights from the New York Times (click the image above for a larger view):
*
The rising cost of college — even before the recession — threatens to put higher education out of reach for most Americans, according to the annual report from the National Center for Public Policy and Higher Education. Over all, the report found, published college tuition and fees increased 439 percent from 1982 to 2007, adjusted for inflation, while median family income rose 147 percent. Student borrowing has more than doubled in the last decade, and students from lower-income families, on average, get smaller grants from the colleges they attend than students from more affluent families.
*
“When we come out of the recession,” Mr. Callan [Patrick M. Callan, president of the center] added, “we’re really going to be in jeopardy, because the educational gap between our work force and the rest of the world will make it very hard to be competitive. Already, we’re one of the few countries where 25- to 34-year-olds are less educated than older workers.” Although college enrollment has continued to rise in recent years, Mr. Callan said, it is not clear how long that can continue.
*
The report, “Measuring Up 2008,” is one of the few to compare net college costs — that is, a year’s tuition, fees, room and board, minus financial aid — against median family income. Those findings are stark. Last year, the net cost at a four-year public university amounted to 28 percent of the median family income, while a four-year private university cost 76 percent of the median family income.
*
While tuition has risen at public universities, his report said, that has largely been to make up for declining state appropriations. The report offered its own cost projections, not including room and board. “Projecting out to 2036, tuition would go from 11 percent of the family budget to 24 percent of the family budget, and that’s pretty huge,” Mr. Shulenburger said. “We only looked at tuition and fees because those are the only things we can control.”
*
Mr. Shulenburger’s report suggested that public universities explore a variety of approaches to lower costs — distance learning, better use of senior year in high school, perhaps even shortening college from four years.
Posted by Michael-in-Norfolk at Wednesday, December 03, 2008