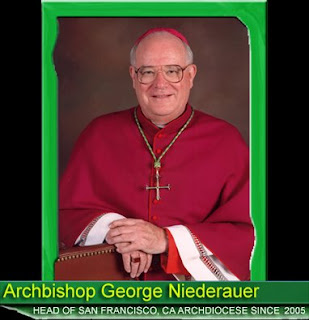 Archbishop George Niederauer of the San Francisco diocese is apparently trying to give cover to the massive Mormon Church involvement in the passage of Proposition 8 and cover his own ass in terms of having crossed the line in having his diocese actively work for the passage of legislation - a big no-no with the IRS. Personally, I'd love to see an IRS audit of the San Francisco diocese's full involvement. As for Niederauer's whining about the right of religious leaders to speak out on issues of public policy, that's all fine and good - just do not ask to be tax-exempt if you are going to be an active player in politics. You do not get to have your cake and eat it too. I would also note that I have seen any reports of Niederauer demanding accountability from his brethren bishops and cardinals who enabled/covered up the sexual abuse of minors - a much more heinous thing than gay marriage. But then, Niederauer is the typical corpulent (he doesn't look like he does much fasting), falsely pious Roman Catholic bishop whose strongest attribute is hypocrisy. Here are some highlights from the San Francisco Chronicle:
*
San Francisco Catholic Archbishop George Niederauer, in his first extensive explanation about his role in the passage of Proposition 8, on Wednesday defended the church's actions in the successful ballot initiative. "Religious leaders in America have the constitutional right to speak out on issues of public policy," Niederauer wrote in a statement posted on the archdiocese's Web site.
*
Niederauer's statement, coming more than a month after the vote to ban same-sex marriage in the nation's most populous state, underscored the complex role he plays. . . . During the campaign, Niederauer issued statements, sent flyers and gave a videotaped interview posted at www.marriagematterstokids.org. But Niederauer's most prominent action was drawing in the Church of Jesus Christ of Latter-day Saints, whose members responded with intensive grassroots organizing and an estimated $20 million in campaign contributions from individuals that accounted for half of the Yes on 8 campaign's total.
*
In his statement Wednesday, titled "Moving forward together," Niederauer urged both sides to tone down the rhetoric and move toward a common cause. "Tolerance, respect and trust are always two-way streets and tolerance, respect and trust often do not include agreement, or even approval," he wrote.
*
Kevin Sullivan, a gay parishioner at St. Dominic's in the Fillmore district, found Niederauer's letter to be "very condescending" and said the archdiocese deserves the moniker of being bigoted. "The actions of our archdiocese and this archbishop in no way spoke of tolerance, respect and trust toward gay Catholics," said Sullivan, 50. "It will take the gay community a very long time to forgive our archdiocese for this."
*
Personally, I do not understand how any LGBT individual can remain in the Catholic Church which under the current Pope and hierarchy is nothing less than an abomination and an insult to the true Gospel message. I wish more Catholics would walk away and find more truly Christian church homes and let Catholicism wither on the vine as it so justly deserves.
Posted by Michael-in-Norfolk at Thursday, December 04, 2008