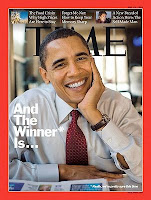 In contrast to the many horrendous selections of the Chimperator's administration, Barack Obama's picks to date for his cabinet indicate that competence and intellect are once again important rather than merely a blind allegiance to a particular dogma or agenda. Obviously, if the Chimperator had not surrounded himself with so many "yes men," perhaps many of the disasters of the last eight years might have been avoided or handled much more competently. Likewise, we will soon see scientific truth and research trumping Christianist views in a number of government agencies. Here are some analysis highlights from Dan Froomkin at the Washington Post:
*
The way President-elect Barack Obama is assembling his brain trust doesn't just indicate a dramatic turn away from President Bush's policies. It also suggests the return of spirited policy debates to a White House that has been largely devoid of them for the last eight years.
*
Rather than simply hire a new brand of loyalists -- or replace one gut player with another -- Obama is making it clear that he wants his thinking challenged and wants to hear opposing views before he reaches his decisions. That would be a dramatic contrast to the intellectually incurious Bush, who so rarely ventured beyond his bubble of flatterers and yes-men.
*
Obama said. "One of the dangers in a White House, based on my reading of history, is that you get wrapped up in group-think and everybody agrees with everything and there's no discussion and there are no dissenting views. So I am going to be welcoming a vigorous debate inside the White House.
*
"'Open and serious debate versus ideological certitude will be a great relief to the military leaders,' said retired Maj. Gen. William L. Nash of the Council on Foreign Relations. Senior officers are aware that few in their ranks voiced misgivings over the Iraq war, but they counter that they were not encouraged to do so by the Bush White House or the Pentagon under Donald H. Rumsfeld. "'The joke was that when you leave a meeting, everybody is supposed to drink the Kool-Aid,' Nash said. 'In the Bush administration, you had to drink the Kool-Aid before you got to go to the meeting.'"
*
And here's another way the Obama White House will be a far sight different than Bush's: There will be no Cheney figure, squelching opposing views. Here's Vice President Cheney watcher and New Yorker reporter Jane Mayer yesterday on CBS's Face the Nation: "You're seeing very strong players divvying up this national security portfolio. So that won't -- it takes a president like Bush to have a vice president like Cheney. Obama so far seems to be so much more involved in the details and in kind of wanting to command the policies all the way up and down.
Posted by Michael-in-Norfolk at Monday, December 01, 2008

I am so looking forward to him taking office. Now if we can keep the loonies at bay....