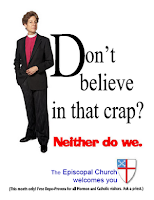 With all the pressing issues in the USA not to mention the world - starvation, genocide, wars, homelessness - one has to wonder about the priorities of the "conservative" Episcopalians who obsess over gay clergy and the acceptance of gays as full church members to the exclusion of all else. Are their faith and belief system so terribly fragile that the concept that maybe, just maybe, the few phrases they cling to in the Bible to justify demonizing gays might not be accurate that the thought sends their house of cards world crashing down? I would love to see psychological profiles worked up on the male members of this break away group - I suspect it would reveal that these people are very f*cked up and have some serious mental health issues. Oh, and as I have argued before, why are they perfectly alright with divorce even though JESUS is said to have condemned it (why he was silent on gays)? I seriously do not understand the bigotry and hypocrisy of these "conservatives." Here are some highlights from the Washington Post concerning the Pharisees/homophobes' latest actions:
*
Conservatives from the Episcopal Church voted yesterday to form their own branch of Anglicanism in the United States and said they would seek new recognition in the worldwide church because of their growing disenchantment over the ordination of an openly gay bishop and other liberal developments.
*
The conservatives remain upset about the 2003 ordination of Gene Robinson of New Hampshire, the role of female clergy, the church's definition of salvation and changes to the main book of prayer. It was unclear how other branches of Anglicanism, a loose affiliation of 77 million people that is the third-largest Christian church in the world, will react.
*
Bishop Martyn Minns, a Virginia-based conservative leader, said a new constitution and canons approved by conservatives would be reviewed this week by seven like-minded Anglican leaders, mostly in Africa, who were expected to approve it. He said meetings both formal and informal would begin with other branch leaders to seek approval.
*
Although yesterday's votes took some church leaders by surprise, conservatives have been speaking of forming an alternative body for decades. Among the challenges they have faced are internal divisions about issues including the role of laypeople and female clergy. Minns said the new canons allow female deacons and priests in churches that choose them but do not allow female bishops.
Posted by Michael-in-Norfolk at Thursday, December 04, 2008