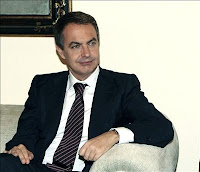 I have previously commented on the Roman Catholic Church's recent efforts in Spain and Italy to interfere with the countries' civil laws. Not surprisingly, the Church tried to work against laws allowing for abortion and regarding gay marriage to name a few issues. In effect, the Church believes the civil laws must match the Church's position on issues. Unlike the USA where politicians lack the backbone to take on the Church and Christianists, the prime Minister of Spain stood up to the Church and stood by constitutional protections for all citizens (yes, a truly amazing concept that some of the US presidential candidates might want to ponder). Here are some highlights on the Prime Minister's response(http://www.typicallyspanish.com/news/publish/article_14413.shtml):
The Spanish Prime Minister, José Luis Rodríguez Zapatero, has responded to the criticism launched against government policies at a Catholic Church rally in Madrid last Sunday.Zapatero said that his government was carrying out policies which were supported by the ‘immense majority’ of the Spanish people, and Spain would continue to act in that way.
Making no effort to mask his anger at the Cardinals and Bishops who led the Catholic Church event in the Plaza de Colón, Zapatero reminded them that the Spanish Constitution ensured that there was room for everybody in Spain, that everybody has the right to have rights, whatever they think, and whether they belong to a religion or not. The Prime Minister made his comments at a rally in the Huelva town of Almonte.
A statement from the PSOE Socialist party confirmed that the government had no intention of taking any step backwards, and that in a democratic environment there is no place for legislation regarding faith.
Posted by Michael-in-Norfolk at Friday, January 04, 2008