Presiding Bishop of the Episcopal Church: Robinson Not the Only Gay Bishop in Anglican Communion 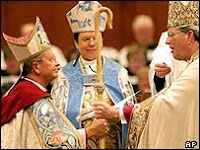 As reported by the BBC News(http://news.bbc.co.uk/2/hi/americas/7166964.stm) Katherine, Jefferts Schori, Presiding Bishop of the Episcopal Church, has told the BBC her church is paying the price for its honesty over sexuality. In defending Bishop Gene Robinson, Jefferts Schori said "He is certainly not alone in being a gay bishop, he's certainly not alone in being a gay partnered bishop," she said. "He is alone in being the only gay partnered bishop who's open about that status." Personally, I believe the conduct of the Anglican Communion towards the Episcopal Church suggests that "outing" might be appropriate to end the hypocrisy now rampant within the denomination. Gene Robinson is being punished for his honesty while others are doing the same thing in the closet. Here are highlights of some of Jefferts Schori's other comments:

She said other Anglican churches also have gay bishops in committed partnerships and should be open about it. "There's certainly a double standard," she told BBC Radio 4's PM programme .

The US church also faces criticism over its stance on services of blessing for gay couples. The church has stated it will not officially authorise such services, but Presiding Bishop Jefferts Schori admits they do take place. "Those services are happening in various places, including in the Church of England, where my understanding is that there are far more of them happening than there are in the Episcopal Church," she said.

Presiding Bishop Jefferts Schori refused to criticise US parishes that carry out services of blessing for gay couples, saying that it was a decision for each individual church.
Posted by Michael-in-Norfolk at Wednesday, January 02, 2008