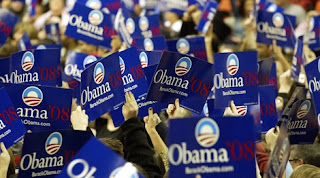 While who will be the winners in the presidential primaries starting in Iowa is still up for grabs, one thing that the latest DesMoines Register poll (http://www.desmoinesregister.com/apps/pbcs.dll/article?AID=/20071231/NEWS09/71231044/1001/NEWS) appears to indicate is that voters are fed up with the status quo and want someone who can move the country forward on a new basis. On this issue, Obama seems to be viewed as the best hope of change. Personally, I feel the same way - unless there is a dramatic shift in leadership and the way business is conducted, I am very pessimistic about America's future. The way of governing and the political atmosphere must change. Here are some highlights:

In an indication of the Obama's appeal in Iowa, Democratic caucusgoers say they prefer change and unity over other leadership characteristics. Selecting a candidate who represents a sharp departure from the status quo is 56-year-old Lansing Democrat John Rethwisch's priority, and his main reason for backing Obama.
"I have been seeing more and more something Kennedy-esque coming from Obama," said Rethwisch, Lansing's water and sewer administrator. "But it's always a gamble when you get somebody in there who hasn't got a proven track record."Thirty percent of the poll's respondents said a candidate's ability to bring about change is the most important, followed by 27 percent who said their priority is choosing a candidate who will be the most successful in unifying the country.
Asked which candidate would do the best on these themes, caucusgoers most commonly name Obama. The first-term U.S. senator has argued in the closing weeks of the campaign that his newness to Washington, D.C., would help him bridge a politically divided nation and improve its standing overseas.

Obama is the clear choice of caucusgoers who affiliate with neither the Democrat or Republican parties, with roughly 40 percent of them backing him in the survey.The support from non-Democrats is significant because a whopping 40 percent of those planning to attend described themselves as independent and another 5 percent as Republican. Only registered Democrats can participate in the caucuses, although rules allow participants to change their party registration on their way in to the caucuses.
As for the electability of a black to the presidency (which Hillary keeps talking about), the Iowa demographics are perhaps instructive based on the racial make up of the state: White alone, not Hispanic or Latino: 91.0%; African Americans: 2.5%
Posted by Michael-in-Norfolk at Tuesday, January 01, 2008