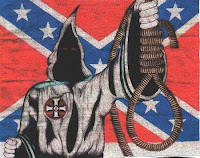 With Mike Huckabee the GOP winner in Iowa, it is all the more important that people understand the background and history of his religious denomination. Remember - Huckabee is an ordained minister in this denomination. Richard Rothstein has a brief summary over at Proceed at Your Own Risk (http://rjr10036.typepad.com/proceed_at_your_own_risk/2008/01/iowa-the-south.html). Here is a partial quote:
For those of you not up on your American history, the Southern Baptist Convention was created in 1845 when the American Baptist Church split between Christians who believed that slavery--despite being endorsed by the Bible--was an abomination and Christians who believed--supported by that same Bible--that the dark skinned races were not human and should be kept as property by the white race. Today, the Southern Baptist Convention is the largest Protestant denomination in the world and the driving force behind homophobia. Having lost on the slavery issue, they are now recycling the same exact language and arguments for their war on queers. And after testing the waters with George W. Bush, they now have officially come out of the white Christian fundamentalist sexually-repressed closet with Mike Huckabee. Some 143 years since the end of the Civil War, the South has scored it greatest victory and is closer to the White House than ever before.
Obama, a black man with a white mother and a black father, last night became the first black man in history to win a presidential primary. It's also worth noting that in some parts of this nation Obama's parents would not have been able to legally marry as recently at 1967. And as an interracial couple, they would have been arrested and possibly lynched in some of these United States.
And in what states were such laws in existence as late as 1967? The states where the Southern Baptists are the most numerous and politically powerful, including Virginia.
Posted by Michael-in-Norfolk at Friday, January 04, 2008