The Demise of Privacy in Face of Growing Surveillance 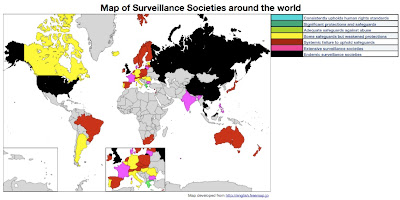 This report by US-based Electronic Privacy Information Center and the UK-based Privacy International is a bit shocking in some ways, but not surprising in others. The USA, the self-styled land of liberty ranks right up there with police states when the privacy of its citizens is taken into consideration. Moreover, as shown by the map above (black denotes the poorest ranking), countries that have had the closest ties with the Chimperator over the last few years score poorly as well, the UK in particular. Here are some highlights:
Each year since 1997, the US-based Electronic Privacy Information Center and the UK-based Privacy International have undertaken what has now become the most comprehensive survey of global privacy ever published. The Privacy & Human Rights Report surveys developments in 70 countries, assessing the state of surveillance and privacy protection.
The most recent report published in 2007, available at http://www.privacyinternational.org/phr, is probably the most comprehensive single volume report published in the human rights field. The report runs over 1,100 pages and includes 6,000 footnotes. More than 200 experts from around the world have provided materials and commentary. The participants range from eminent privacy scholars to high-level officials charged with safeguarding constitutional freedoms in their countries. Academics, human rights advocates, journalists and researchers provided reports, insight, documents and advice.
Summary of key findings:
In terms of statutory protections and privacy enforcement, the US is the worst ranking country in the democratic world. In terms of overall privacy protection the United States has performed very poorly, being out-ranked by both India and the Philippines and falling into the "black" category, denoting endemic surveillance.
The worst ranking EU country is the United Kingdom, which again fell into the "black" category along with Russia and Singapore. However for the first time Scotland has been given its own ranking score and performed significantly better than England & Wales.
Argentina scored higher than 18 of the 27 EU countries.
For more details see: http://www.privacyinternational.org/article.shtml?cmd%5B347%5D=x-347-559597
Posted by Michael-in-Norfolk at Tuesday, January 01, 2008