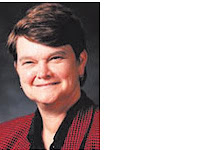 This op-ed article (http://www.nctimes.com/articles/2007/12/31/perspective/8_26_3112_29_07.txt) from the newspaper serving San Diego and Riverside Counties, California, is a rebuttal of the disingenuous claims (i.e., lies) being put out by the opponents of recently passed SB 777 that was signed into law by Governor Schwarzenegger. The author of the article, Sheila Kuehl, is a Democratic state senator from Santa Monica who authored SB 777, which was signed into law and is set to take effect next month. I recommend reading the entire op-ed piece because it illustrates how the Christianist intentionally distort the truth and seek to frighten the ignorant and uninformed. As I have said countless times, I do not understand how these self-professed Christians can justify their dishonesty and lies when the faith they claim to embrace forbids lying and bearing false witness. It is crucial that we know the tactics of our enemies and seek to expose them as liars as often as possible. Here are some highlights:

When society tells a young person ---- in subtle or, often, not so subtle, ways ---- that they are less valuable, perhaps because of the color of their skin, their religious practices or the gender of the person they want to take to the prom, the whole society suffers.
When we mandate that every young person must go to school, we must also provide the safety and dignity of an education free from harassment, discrimination and violence. That is why, over the last several years, I have authored several laws that strengthen civil rights protections for students and improve school safety. This year, as a simple cleanup measure, I authored SB 777 to include civil rights protections that have already been required for the last eight years by law to be more clearly spelled out in California's Education Code.
Seeing an opportunity to confuse their supporters by pretending the bill added protections to the code, the opposition has invented a number of inflammatory and false claims about the operation of SB 777. A bit of clarity, not to say truth-telling is in order.
First bit of balderdash: SB 777 certainly would not ban reference to "mom" and "dad" in the curriculum. Because nothing in SB 777 changes law that has been in place for eight years, you might have heard if such a ban had been put in place. In addition, if you did try to ban all reference to "mom" and "dad," it would be promoting a bias against heterosexuality, which is prohibited under current law, which means SB 777, as well. Ironically, SB 777 actually makes it clearer that this type of discrimination is prohibited by spelling out the legal definition of sexual orientation (heterosexuality, bisexuality and homosexuality) in the section of the Education Code that prohibits discrimination in school programs and activities.

Second bit of balderdash: SB 777 does not create a radical new definition of gender that will allow boys and girls to shower together and force schools to have unisex bathrooms and locker rooms. California has prohibited gender discrimination in schools using the exact same definition of gender found in SB 777 since the year 2000. Interestingly, precisely the same allegations were attempted 35 years ago by opponents of Title IX, which banned gender discrimination in schools under federal law. Those rather amusing predictions did not come true under Title IX and they have not come true under the law concerning schools that has been in effect in California since 2000, a law that is simply repeated in SB 777.

Third bit of balderdash: SB 777 does not change the content requirements for textbooks and other instructional materials. Although the opposition makes a valiant attempt to create confusion about the scope of current law, discrimination based upon a student's actual or perceived disability, gender, nationality, race or ethnicity, religion, sexual orientation or association with a person who has any of these characteristics has been prohibited in all publicly funded school programs and activities (including textbooks and classroom instruction) since 2000.

A repeal of SB 777 cannot strip away the existing protections for students against discrimination that have been in the law since 2000, the only effect of a repeal of SB 777 would be to confuse the public as to the scope of the existing civil rights protections for students. Perhaps, after all, that is the goal of the opposition. If you don't know your rights, you can't use them.
Posted by Michael-in-Norfolk at Monday, December 31, 2007