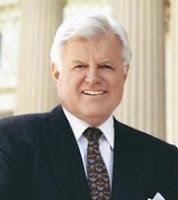 While it will do doubt cause more bickering and back biting by and among gay rights organizations, as the Washington Blade is reporting (http://www.washblade.com/2008/1-4/news/national/11819.cfm), Senator Edward Kennedy is pushing for a vote in 2008 on a "gay only" version of ENDA. In fact, the bickering has already begun based on what I have seen on several other blogs, including some statements that it will sabotage the Democrat candidates. Inasmuch as virtually all of the viable Democrat candidates have already publicly endorsed civil unions, how taking a position of a law that prevent gays from being randomly fired due to their sexual orientation would seem to be not exactly something risky. Particularly when most Americans - except for fundie wingnuts who would NEVER vote for the Democrat candidate anyways - support employment protections for gays. Such was my experience with call-in viewers in Martinsville, Virginia, back in the spring on a show featuring one of my clients. If that redneck area was pro-gay employment protections, most anywhere would be.
True the transgender community would be left out - for now - but as I have stated a number of times, I continue to believe that it is better to get something enacted rather than hold out for something that by all reports cannot pass the U.S. Senate. As for Bush's threatened veto, make him have to veto the legislation during this important election year. With polls showing that roughly two thirds (2/3) of the public support work place employment protections for gays, a Bush veto would only serve to further demonstrate that the GOP's is increasingly out of touch with moderate main stream voters. As for members of the LGBT community that might sit home in a huff over this version of ENDA, I am sorry, but in my view, if they are that stupid and petty, then they deserve Mike Huckabee for President. Here are some story highlights from the Blade:
Sen. Edward Kennedy (D-Mass.) is expected to push for a Senate vote in 2008 on the same gay-only version of the Employment Non-Discrimination Act that the House of Representatives passed in 2007, a Kennedy spokesperson said this week. Kennedy stated on the Senate floor on Nov. 8, one day after the House passed ENDA by a vote of 235 to 184, that he hoped the Senate would follow suit by passing the employment protection bill in the current Congress, which lasts through 2008.
But until this week, Kennedy’s office had not stated publicly where Kennedy stood on the demands by many gay and transgender organizations that Congress should withhold any action on ENDA unless it includes protection for transgender persons. “Although Sen. Kennedy strongly supports protections against job discrimination for transgender workers, inaction won’t advance justice for anyone, and will just make it harder to pass any version of ENDA in 2009,” said Kennedy spokesperson Melissa Wagoner.
Asked if Kennedy thought ENDA could pass the Senate in an election year, Wagoner said, “Yes, if enough Republicans support the bill to give us a realistic chance of breaking a filibuster.” Most political observers have predicted Republican senators opposing ENDA will stage a filibuster against the legislation, which requires 60 votes to break through a parliamentary move known as cloture. Kennedy and Sen. Gordon Smith (R-Ore.), who has joined Kennedy as a chief sponsor of ENDA, have said they were hopeful they could line up a bipartisan “super majority” of at least 60 senators to ensure the bill’s passage.
Jim Manley, a spokesperson for Senate Majority Leader Harry Reid (D-Nev.), said this week that Reid strongly supports ENDA and favors holding a Senate vote on the measure in 2008. Manley said Reid would defer to Kennedy on the “strategy and timing” of such a vote.
The statement this week by Kennedy’s office that Kennedy plans to back a gay-only version of ENDA comes after news surfaced last month that a high-level official at the Human Rights Campaign suggested a vote on ENDA would not take place until 2009.
Posted by Michael-in-Norfolk at Saturday, January 05, 2008