Men Who Smoke Prone to Impotence 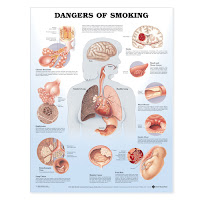 Since gays as a group appear to have an unusually high number of smokers, I figured that I'd highlight this article (http://www.medicinenet.com/script/main/art.asp?articlekey=86110). Personally, I am not a smoker and never have smoked in part because for over 30 years my mother ran a hospital lab that worked at diagnosing cancer in patients. She made a point of presenting gross photos of smokers' lungs and other nasty information to us children in order to convince us that smoking was NOT a good idea. Perhaps this article will convince gays that if they will not stop smoking to protect their health, then maybe they will to avoid impotence. Here are some highlights:

SUNDAY, Dec. 30 (HealthDay News) -- If heart disease, stroke and certain cancers haven't been reason enough for men to quit smoking, consider this: The habit also increases the risk of erectile dysfunction. In fact, emerging research shows that men with a pack-a-day habit are almost 40 percent more likely to struggle with erectile dysfunction than men who don't smoke. "Smoking delivers nicotine and other vasoconstrictors that close down the blood vessels" of the penis, explained Dr. Jack Mydlo, chairman of urology at Temple University School of Medicine and Hospital in Philadelphia.

Mydlo added one more word of caution: "Don't use ED medications -- Viagra, Cialis -- if you don't need them. Erections that last longer than four hours -- priapism -- can cause permanent scar tissue and permanent impotence. It's not a good idea to use these drugs casually."
Posted by Michael-in-Norfolk at Thursday, January 03, 2008

There ya' go! Hit 'em where they live.
My opinion is that gays smoke more than the average population because there is just a lot more stress in the lives of gay men (and lesbians, to a degree). I have never been a smoker, never had any desire to smoke until I started driving a school bus. That first year, especially, was uber-stressful and I had a strong urge to smoke. I actually do smoke occasionally, but more as a social/casual thing. A pack of smokes will last me between 6 months and a year.