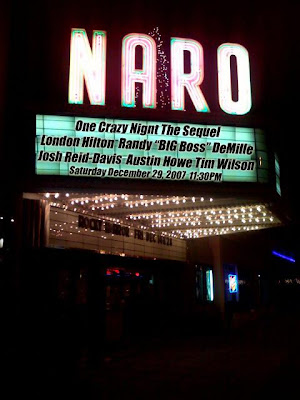 The movie premier last night was a lot of fun. I guess the movie could be described as “Another Gay Movie” meets “Absolutely Fabulous” ala John Waters. Thankfully, my part in the film came off well and I seemed fairly naturally and not too stilted in speaking my lines nor did I look like a dork (an important consideration since the movie is being sold on Amazon.com and a couple of other sites). I was VERY relieved to say the least. None of us had seen the entire movie until last night since most of the filming had been done in segments with only the characters in a specific scene being present. It was definitely a novelty to see oneself up on the large movie screen.

Prior to the late night premier, most of the cast and a number of friends went to No Frills Grill and had adult beverages to prepare us for watching the movie (I had two margaritas). I suspect there were at least 40-50 of us and there will be photos from the pre-screening party uploaded to the movie site later today. I will perhaps post some of them in a later post depending on how crazy we look.
Posted by Michael-in-Norfolk at Sunday, December 30, 2007