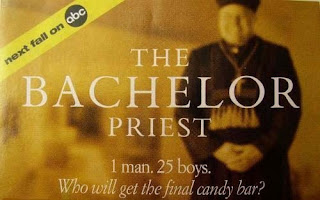 The Nazi Pope continues his drive to depict gays as a threat to traditional families and the Church sponsored rallies in Rome and Madrid to fan homophobia. While the Church would no doubt describe its actions differently, the net effect is to promote anti-gay attitudes and prejudice. It is increasingly difficult to find adequate words for how despicable the Catholic Church's anti-gay crusade has become. Here are some highlights from 365gay.com (http://www.365gay.com/Newscon07/12/123007pope.htm):

(Vatican City) Tens of thousands gathered in Madrid and Vatican City for Catholic rallies promoting traditional families on Sunday. Pope Benedict XVI addressed the crowd in St Peter's Square in his last Angelus prayer of 2007 which was broadcast on a giant TV screen for throngs who had come to Madrid's Plaza de Colon to hear him. Many of the faithful at the Madrid rally were bussed to the capital from cities throughout Spain. Police declined to give a crowd estimate but there were so many people they spilled out into streets feeding into the square.
The pope spoke from the window of his apartment overlooking St Peter's Square which was packed. Benedict spoke in both Italian and Spanish admonishing the faithful to protect traditional marriage. Spain legalized same-sex marriage in 2005, Italy has been mulling civil partnership legislation. In Spanish the Pope said that the family is "based on the unbreakable union of man and woman and represents the privileged environment where human life is welcomed and protected from the beginning to its natural end."
Posted by Michael-in-Norfolk at Sunday, December 30, 2007