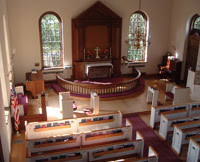 This trial will be very interesting to watch. In the Episcopal Church, title to many church properties belongs to the diocese and NOT the individual congregations. Hence, if a congregation wants to leave the church to further their bigoted and anti-gay views, the diocese basically has the right to tell the congregation to vacate the church premises. I truly hope that the courts will uphold the diocese on this point and send this hate merchants packing. Here are highlights from the Washington Post (http://www.washingtonpost.com/wp-dyn/content/article/2007/11/13/AR2007111302078.html?hpid=sec-religion):
Tens of millions of dollars of Virginia real estate are at stake in a trial that began yesterday in Fairfax County Circuit Court, where priests, members of bitterly divided churches and lawyers filled the pews. It is one of the largest property disputes in Episcopal Church history. The trial comes almost a year after the majority of congregants in 15 traditional Episcopal churches voted to leave the national church because of disagreements about the nature of God and salvation and about whether gay men and lesbians should be fully accepted. Northern Virginia has since become one of the most active areas in the country for the conservative, breakaway movement, and clergy around the country are watching this trial to see what happens to Episcopalians who want to leave -- and take church properties with them.
Only 11 of the original 15 congregations are involved in the litigation currently in court, including the grand, historic Truro Church in Fairfax City and The Falls Church in the city of Falls Church. Officials with the Virginia diocese said the property in dispute is worth at least $30 million. The trial, which is scheduled to go on until late next week, is actually the first of two trials, and no resolution in the land dispute will come until early next year at the earliest.
The first trial is meant to determine whether the congregations "divided" under the legal meaning of the word. After the congregations voted, they filed court documents citing a Civil War-era part of Virginia code that allows congregations that have divided to vote on where they wish to affiliate. If the court approves the documents, according to the historic code, then the breakaway churches get the property. After voting to leave, the 11 churches placed themselves within a Virginia-based branch of the Church of Nigeria -- another wing in the Communion.
The Virginia diocese is arguing that there was no division, but rather that individuals unhappy with the Episcopal Church chose to leave. The diocese and the national church, which are both parties in the case, say that the Episcopal Church is hierarchical and therefore a "division" can only happen if there is a vote of its governing body.
Fairfax Circuit Court Judge Randy I. Bellows has said he will rule on this case next month. Regardless of how he rules, a second trial will be held on lawsuits brought by the diocese and national church against the breakaway churches. That action asks the Circuit Court to declare the diocese the rightful owner of all property. The suits also asked the court to force the breakaway congregations off the 11 properties, which they have occupied since the votes in December and January.
Truro Church is very historic and, therefore, the stakes are all the higher:
Truro Parish was created by order of the Virginia House of Burgesses in 1732, some 10 years before Fairfax County itself came into existence. The father of George Washington, Augustine Washington, was a Truro vestryman and nominated the first regular rector of the parish in 1736. George Washington himself was appointed to the vestry in 1762. In 1768, a new building was erected with a closer proximity to the Town of Fairfax.
Posted by Michael-in-Norfolk at Wednesday, November 14, 2007

If it were the other way around, if the diocese was anti-gay and the individual congregation was gay affirming, would you still want the diocese to retain title to the facilities?
About 30 years ago the mainline Presbyterian Church denomination was in the midst of a theological/philosophical struggle. It was similar to the trouble in the Southern Baptist Convention these days. Liberal vs. Conservative. The presbyteries, the larger governing body similar to the diocese of the Episcopal Church, held title to all property. The more conservative congregations ended up leaving the Presbyterian Church of the U.S. (or whatever it was called then. I think the name has changed since then), thus losing their property. There may have been more than one new denomination started at that point, but I am familiar with the Presbyterian Church in America. That’s the denomination where I still have my membership (for now.) The governing structure is still the same, with area presbyteries of many congregations, and a general assembly trying to keep it all on the same sheet of music. But in the Presb Church of America each congregation owns its own land. They’ll not make the mistake of the previous group. They’ll make all new mistakes!