Church of Norway Ready to Ordain Priests in Same-sex Partnerships 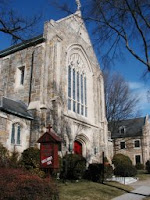 I am currently a member of the Evangelical Lutheran Church in America - a sister church to the Church of Norway - although I have been giving some thought to going back to the Episcopal Church. Sadly, the ELCA has not had the courage to "do the right thing" when it comes to acceptance of gays as full church members, so hopefully as sister church DO "do the right thing," there will be increased pressure for the ELCA to act as Christ would act, and not continue to act as the bigoted, self-satisfied, self-righteous Pharisees would act. In my opinion, those in the ELCA who worry more about "church unity" than acting in a Christlike manner are basically hypocrites for whom I have little use. Generally, doing what's right is NEVER popular with the Pharisee crowd. Here are some highlights from PageOneQ's coverage (http://pageoneq.com/news/2007/Church_of_Norway_OKs_gay_p_1116.html):
Oslo (dpa) - The Church of Norway on Friday approved allowing priests to be ordained even if they live in same-sex partnerships. The general synod, highest decision-making body of the state Evangelical-Lutheran church, voted 50-34 to approve a new principle that stated that there were two opposite views, both based on church teachings, on same-sex relationships. Opponents had wanted to uphold the former praxis that prevented ordaining priests who live in registered same-sex partnerships.
The new principle would mean that decisions on hiring gay priests would be decided by the bishop - Norway has 11 - or the appointing church board. Some 80 per cent of the country's 4.7 million inhabitants are members of the Church of Norway. About one fifth of the 1,200 clergy are women.
Posted by Michael-in-Norfolk at Friday, November 16, 2007