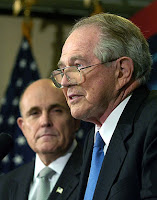 I will concede that I do not trust Rudy Giuliani and with former in-laws in New York City - some of whom lived near the WTC site and were exposed to the pollutants in the air - I am glad that someone is challenging Giuliani's sanitized version of events. His disgusting pandering to the Christianist far right is also a huge concern, as is his effort to out cowboy the Chimperator in bellicose foreign policy comments. Here are some highlights form an ABC News story (http://abcnews.go.com/Politics/story?id=3881195&page=1):
A group of 9/11 firefighters and victims' family members with eyes on derailing Republican Rudy Giuliani's presidential campaign is close to a decision on forming an entity that would run issue ads in key early nominating states. "TV made him a hero, and we'll use TV to take him down," New York Fire Chief Jim Riches told ABC News.
This Monday, the firefighters and family members are holding a meeting at Dartmouth College in New Hampshire hoping to spread the word about what they say is Giuliani's "egregious" use of 9/11 for political gain. The group also is considering additional trips to early presidential primary states Iowa, Florida and South Carolina. Riches, who lost his firefighter son Jimmy in the World Trade Center's north tower, said, "We don't want him running on 9/11 or the bodies of all these dead people or my dead son saying that he did a great job that day."

He and other members of the anti-Giuliani group claim 9/11 first responders were given bad radios and that that prevented them from hearing evacuation orders when the World Trade Center buildings were about to collapse. They also contend Giuliani rushed cleanup work and misled people about air quality at Ground Zero, where recovery workers, including Riches, say they contracted illnesses.

I also remember how my former father-in-law, a former top member of the FDNY Division of Safety, NEVER liked the World Trade Center and felt it's construction, fire suppression system, etc., was not what it should have been. He always contrasted the WTC with the Empire State Building which he thought was a wonderful structure, even though considerably older. For example, he would never go to Windows on the World at the top of the complex because of his issues with the WTC.
Posted by Michael-in-Norfolk at Saturday, November 17, 2007