Rhett Butler's People (St. Martin's; 500 pages) A Sequel to Gone With the Wind. 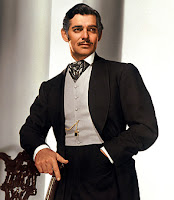 Living in the South the majority of my life - particularly when I lived in Mobile, Alabama - one can never fully escape from "Gone With the Wind," Margaret Mitchell's incredibly successful novel, made in to the 1939 block buster movie. This is even more true, of course, when one has family ancestors from New Orleans who were Confederate veterans (one even was held in a Union prisoner of war camp in Michigan for a period of time - my mother has copies of his release papers somewhere still). While one can debate the merits of the version of history projected by Mitchell's book, in fact it does reveal much in terms of the Southern mind set which still has not fully faded to this day. This Time magazine story (http://www.time.com/time/magazine/article/0,9171,1682262,00.html) looks at a new sequel, this time written from Rhett Butler's perspective, rather than Scarlett's. I will no doubt purchase it out of curiosity and the hope of an entertaining read. Here are some story highlights:
McCaig's idea was to rewrite the book from Rhett's point of view. "Gone With the Wind has, structurally, an interesting difference from most important novels," he says. "It's that the second lead, Rhett Butler, is mysterious. He goes out of town--nobody says where or why. He makes his money--nobody says where or how. He apparently has no friends except for Belle Watling. And that looked to me to be an unusual opportunity." Mitchell's people agreed. They handed him the franchise, no strings attached.
He fills in Rhett's early years and answers some questions about where he ends up. We also see, from Rhett's point of view, his first chance glimpse of Scarlett at a party: "My God." Rhett moistened dry lips. "She's just like me!"
His heart slowed. He looked away, smiling at himself. It had been a long time since he'd made a fool of himself over a woman. McCaig's Rhett is a success. He grasps the paradox of the character, which is that he never loses his head in a battle or a business deal and never ceases to make a hopeless ass of himself over Scarlett. He's hardheaded enough to see through the myth of the glorious South but softhearted enough to mourn its passing. When the first Federal shell hits Atlanta, shaking paint chips from the tin ceiling of the bar he's drinking in, Rhett doesn't run for cover. He casually puts his hand over his glass to save his beer.
In our R-rated age, McCaig has a freer hand than Mitchell did in recounting Rhett's amorous athletics and the depredations of postbellum life. ("Let me give you a simple statistic," McCaig says. "The biggest expenditure of the Alabama legislature the first year after the war was for wooden legs. That's how bad it was.") He also adds a bold Confederate scout, who is, McCaig broadly hints, gay. ("How come you never get yourself a gal, Master Jamie?")
However much he expands Rhett's horizons, McCaig takes care to leave intact the original details of Mitchell's narrative, though he does take a liberty with history: he moves the 1851 invasion of Cuba to a few years later so Rhett can attend. He also endows Rhett with almost anachronistically enlightened ideas about race. "The original Rhett's racial attitudes were kind of ambiguous," says McCaig. "Some people have had problems with Margaret Mitchell's racial attitudes. Well, she was a Southern writer of her time, and I'm a Southern writer of mine." Apparently Rhett gives a damn about something after all.
P. S. In my view, no one will EVER be able to play Rhett Butler the way Clark Gable did. Sexy and hot in a butch way.
Posted by Michael-in-Norfolk at Monday, November 12, 2007

The book sounds like an interesting read.
On the other hand, I've never been too fond of Clark Gable or Rhett Butler. I've never actually read the book (do I have to turn in my southern card?) but I had more sympathy for the character Rhett than I did for Scarlett in the movie. However, that pencil-thin mustache, the haughty look, the dapper haberdashery all leave me cold.

I'm pretty sure I was bitten by a pencil-thin mustache as a sexually blossoming sweet young thing. While the experience was thrilling at the time, the fall-out was unpleasant. So maybe it isn't so much Clark Gable himself that I have trouble with, but rather the cocky young fool with the pencil-thin mustache who took advantage of me.