More on the Coup Bush/Cheney Have Worked in the USA 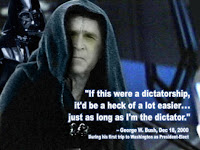 I posted about this phenomena before, but found this great run down of the facts on Andrew Sullivan's blog (http://andrewsullivan.theatlantic.com/the_daily_dish/2007/11/a-quiet-coup.html). It is important just how badly the U. S. Constitution has been subverted by this regime, all with little real resistance. It is yet another example of how Hitler came to power in the 1930's: no one paid attention until it was too late. Here is the main factual summary:

The facts are as follows: this president believes that he is not ultimately subject to the rule of law in waging war since 9/11; he believes he can ignore any laws passed in this respect - even those passed with veto-proof majorities if necessary - by signing statements, whose frequency has soared under the Cheney-Bush presidency; he believes that the parameters of the war powers include the territory of the United States and every citizen of the United States; he believes he has the right to seize any individual in this country or the world without charging them and hold them indefinitely or subject them to kangaroo military courts where basic due process protections are absent; he has clearly authorized the torture of many individuals using this power, while redefining the word torture against the plain meaning of the term in law and in English. He has done all this with barely any real push-back from the Congress and only minimal interference from the Supreme Court which he has bolstered with Justices who uphold great deference to the executive branch in wartime.
And all these emergency powers - sanctioned by the notion of an emergency and defended with references to previous emergencies (such as the Civil War and the Second World War) - are, unlike in the past, indefinitely awarded to the executive branch, because this war is against an amorphous entity that by definition cannot surrender. And so we have transformed emergency powers - controversial even under those circumstances - into the permanent balance of power in American democracy. If this is not a quiet coup, what would be? And why should conservatives, of all people, support and enable this assault on the constitution and individual liberty, in the name of a war against an abstract enemy that will never be defeated? Has anybody ever read "Nineteen-Eighty-Four"?
What has been allowed to occur is down right frightening. Under different circumstances and in an earlier time, Bush would be potentially facing impeachment, if not treason charges.
Posted by Michael-in-Norfolk at Monday, November 12, 2007

He should definitely be held accountable for the war crimes he has committed. And I do agree that this is how Hitler made a rise to power in Germany.
"All that is necessary for the triumph of evil is that good men do nothing." (Edmund Burke)

And there have been far too many of us doing nothing...