The Coup at Home 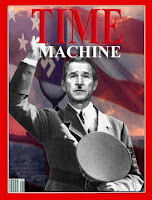 In his op-ed piece today (http://www.nytimes.com/2007/11/11/opinion/11rich.html?_r=1&hp&oref=slogin), Frank Rich again hits the nail on the head in describing the horrible subversion of democracy that has occurred in this country since 9-11. Sadly, leading Democrats are still enabling this process through their mealy mouth caving in to the Chimperator. Have they not heard of the term backbone? Here are a couple highlights from Rich's column:
In the six years of compromising our principles since 9/11, our democracy has so steadily been defined down that it now can resemble the supposedly aspiring democracies we’ve propped up in places like Islamabad. Time has taken its toll. We’ve become inured to democracy-lite. That’s why a Mukasey can be elevated to power with bipartisan support and we barely shrug.
This is a signal difference from the Vietnam era, and not necessarily for the better. During that unpopular war, disaffected Americans took to the streets and sometimes broke laws in an angry assault on American governmental institutions. The Bush years have brought an even more effective assault on those institutions from within. While the public has not erupted in riots, the executive branch has subverted the rule of law in often secretive increments. The results amount to a quiet coup, ultimately more insidious than a blatant putsch like General Musharraf’s.
More Machiavellian still, Mr. Bush has constantly told the world he’s championing democracy even as he strangles it. Mr. Bush repeated the word “freedom” 27 times in roughly 20 minutes at his 2005 inauguration, and even presided over a “Celebration of Freedom” concert on the Ellipse hosted by Ryan Seacrest. It was an Orwellian exercise in branding, nothing more. The sole point was to give cover to our habitual practice of cozying up to despots (especially those who control the oil spigots) and to our own government’s embrace of warrantless wiretapping and torture, among other policies that invert our values.

We are steadily moving towards a banana republic status of government, yet far too few people seem to be noticing, much less taking a stand to stop it. It disgusts me.
Posted by Michael-in-Norfolk at Sunday, November 11, 2007

Email ThisBlogThis!Share to TwitterShare to FacebookShare to Pinterest
Labels: Bush, Bush and Cheney, U. S. Constitution