Religious Based Hatred and Bigotry is Not Unique to Iran 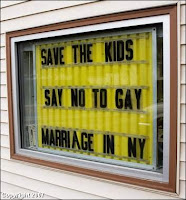 Closer to home, a similar mindset can be found in Southport, New York, where a local insurance agency is making its religion based anti-gay mentality painfully obvious. As this story indicates, the inability to separate religion from the civil laws is not unique to the murderous mullahs in Iran (http://www.stargazette.com/apps/pbcs.dll/article?AID=/20071113/NEWS01/711130320/1001/NEWS):
With conviction as firm as his handshake, a Southport business owner has put up a sign at his insurance agency to take a stand against same-sex marriages in New York state.But some people say they are appalled by the sign and call it discriminatory.
Rick Piper, 56, owner of Auto Home and Family Insurance Center on Broadway, put a sign in the window of the business about a month ago that says "Save the kids -- Say no to gay marriage in NY." He is very clear about his reason for doing it."It's sin, that's all," he said, alluding to passages in the Bible against homosexuality. "It's not so much about how I feel about it. It's not an issue with me. It's an issue with God."
It must be nice to have such a direct link with God that one can know with total assurance - or is it delusion - who is worthy of condemnation. Obviously, Mr. Piper's company would not get my business and if I lived in Elmira, I probably would also complain to the companies for which his company writes policies. Having done a quick check on Mr. Piper's agency, he writes for the following insurance carriers: AIG Specialty Insurance, The Hartford, Drive Insurance from Progressive, Security Mutual, NY Mutual,The Hartford and Bankers Life. Piper's contact information is as follows: Auto Home and Family Insurance, 723B Broadway, Elmira, NY 14904, Phone: (607) 773-9677, Fax: (607) 734-5002, Email: piper-rick@stny.rr.com Apparently, none of the insurance companies were aware of Piper's plans:
Progressive Insurance, among the companies that Piper represents, also had nothing to do with the sign. "These are clearly the beliefs of the agency and are not shared by us," said Leslie Kolleda, a spokeswoman for the company, based in Mayfield Village, Ohio (440) 461-5000." Independent agents are not employees of any company. They represent multiple companies," she said. "Progressive happens to be the largest distributor of car insurance through independent agents."
Posted by Michael-in-Norfolk at Tuesday, November 13, 2007