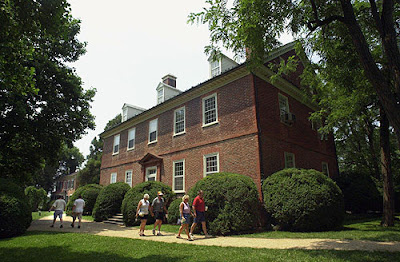 It looks like Virginia will have an extra turkey for Thanksgiving: the Chimperator plans to visit Berkley Plantation, ancestral home of the Harrison family. The only good thing will be that the visit will highlight the fact that Virginia - not the tight-assed Puritans in Massachusetts had the first Thanksgiving more than 2 years before the Massachusetts theocrats did.

Berkley (pictured above) is one of the magnificent plantations on the north side of the James River between Williamsburg and Richmond. Other famous structures include Westover Plantation, home of William Byrd, founder of Richmond, Shirley Plantation, and Sherwood Forest Plantation. One thing about Virginia is that one is always surrounded by notable historic sites. Here are some highlights from the Virginian Pilot coverage ( http://content.hamptonroads.com/story.cfm?story=137078&ran=185184&tref=po):
NORFOLK — President Bush will speak about Thanksgiving during a visit next week to a historic thanksgiving site — in Virginia, not Massachusetts. On Monday, the president will head to Berkeley Plantation, where English settlers held a thanksgiving service almost two years before the Pilgrims' feast in Massachusetts that came to be considered the first Thanksgiving.
Berkeley Plantation is on the banks of the James River, between Williamsburg, Virginia's Colonial capital, and Richmond, the state's capital today. When Capt. John Woodlief and his crew of 37 men came upon the site on Dec. 4, 1619, they fell to their knees and read a proclamation stating that the day of their ship's arrival should be "yearly and perpetually kept holy as a day of thanksgiving to Almighty God."
During the Civil War, President Abraham Lincoln declared the fourth Thursday in November to be a national holiday. With the South losing the war, the New England Thanksgiving tradition prevailed, although President John F. Kennedy did acknowledge Virginia in his 1963 Thanksgiving Day Proclamation that began: "Over three centuries ago, our forefathers in Virginia and in Massachusetts, far from home in a lonely wilderness, set aside a time of thanksgiving."
The country's first 10 presidents all spent time there [at Berkley]. The ninth president, William Henry Harrison, was born at Berkeley and wrote his inaugural address in an upstairs bedroom there. He gave the nearly two-hour speech on a cold, wet day, caught a cold that developed into pneumonia and died a month later. Lincoln also visited Berkeley, while Union troops were encamped there during the Civil War.
Posted by Michael-in-Norfolk at Friday, November 16, 2007