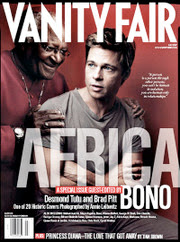 In the July issue of Vanity Fair [Vanity Fair, July 2007, p. 97-98], Brad Pitt (who I admit, I once had such a crush on) interviews South Africa's Archbishop Emeritus Desmond Tutu. During the interview, Pitt and Tutu discuss gay rights. Here's a portion of the interview:
Brad Pitt: So certainly discrimination has no place in Christianity. There's a big argument going on in America right now, on gay rights and equality.
Desmond Tutu: For me, I couldn't ever keep quiet. I came from a situation where for a very long time people were discriminated against, made to suffer for something about which they could do nothing--their ethnicity. We were made to suffer because we were not white. Then, for a very long time in our church, we didn't ordain women, and we were penalizing a huge section of humanity for something about which they could do nothing--their gender. And I'm glad that now the church has changed all that. I'm glad that apartheid has ended. I could not for any part of me be able to keep quiet, because people were being penalized, ostracized, treated as if they were less than human, because of something they could do nothing to change--their sexual orientation. For me, I can't imagine the Lord that I worship, this Jesus Christ, actually concurring with the persecution of a minority that is already being persecuted. The Jesus who I worship is a Jesus who was forever on the side of those who were being clobbered, and he got into trouble precisely because of that. Our church, the Anglican Church, is experiencing a very, very serious crisis. It is all to do with human sexuality. I think God is weeping. He is weeping that we should be spending so much energy, time, resources on this subject at a time when the world is aching.
Brad Pitt: I couldn't agree with you more. Thank you for saying that.
It saddens me that so many others in the Anglican Church and other denominations (including my own church) do not have the Christrian vision of Desmond Tutu. I too agree that Jesus would never condone discrimination against God's children for merely being who He amde them to be.
Posted by Michael-in-Norfolk at Monday, July 09, 2007

I used to have a crush on Desmond Tutu (I know ~ I have strange crushes but intelligence is just SO DAMN SEXY!) It's back. :)

I agree with pobble... I've adored Desmond Tutu for years... if you saw the series of interviews he did with Ted Kopple a few years back, it's that impish grin and the little giggle that just win me over... and he's been so outspoken on the issue of gay rights, he's a rarity in the Anglican Church these days.

Tutu could teach the "Christian" evangelists in the U.S. a lot. He is truly a man of great compassion, intelligence and humility.