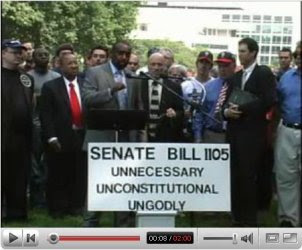 People for the American Way report that yesterday, a collection of extremist right-wing groups, including the African American right-wing think tank Brotherhood Organization of a New Destiny (BOND) and Repent America, along with former Navy chaplain and fringe-right folk hero Gordon Klingenschmitt, held a press conference at the U.S. Capitol to protest Senate hate crimes legislation. The event continued the right-wing’s on-going effort to falsely portray an upcoming Senate bill that would add sexual orientation, gender, and disability to the existing federal hate crime law, as an attack on Christianity.
BOND’s Jesse Lee Peterson puts the legislation into perspective:
“If Christians don’t wake up to what is happening, they will look around one day and realize that they cannot even mention the name of God or disagree with homosexuality.”
Klingenschmitt then more specifically describes the threat:
“If this bill passes, they will come into our churches, they will grab your sermon notes, they will go after your congregation if any pastor preaches against the sin of homosexuality and then a nut in the crowd later goes out and commits a crime. They will accuse him as a codefendant and charge him with a hate speech crime.”
Of course there’s no such thing as a “hate speech crime” in this bill or the existing federal hate crimes law, which targets only violent crimes that cause people bodily harm. In fact, the “Hate Crimes Prevention Act” already passed by the House includes explicit language protecting the First Amendment rights that Klingenschmitt and his colleagues claim are being threatened. But hey, they are Christianists, so why let the trouth get in your way??
Posted by Michael-in-Norfolk at Friday, July 13, 2007

If there's no such thing as a "hate speech crime" then why was this 75 year old Grandmother arrested in Philadelphia for sharing gospel literature on a public sidewalk at a gay-pride rally? Watch the video:
http://www.stophatecrimesnow.com/

Okay. It's not funny. I realize it's not funny. And I simply couldn't help but laugh out loud at the image of some mysterious THEY rushing the pulpits of America. Wonder who THEY are?