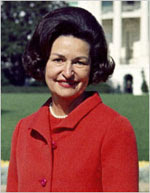 I know I am dating myself, but I always thought Lady Bird Johnson was a class act. I did not like here husband's Vietnam policies for obvious reasons and only missed having to enlist in the military by virtue of a high lottery number (269). Some of my friends were not so lucky - one drew a 2, but fortunately survived. Two other friends (brothers in fact) from my summers in the Adirondacks did not and committed suicide after returning from Vietnam. They just never got over the horror and mental torment they experienced. Here's portions of the Washington Post story on the other LBJ:
Lady Bird Johnson, 94, a first lady whose quiet ambition and determination allowed her to play an influential role in her husband's remarkable political career and to carve out an identity of her own as an advocate for beautifying the national landscape, died yesterday at her home in Austin.
Mrs. Johnson, who also was a successful businesswoman and philanthropist, had been in failing health for several years. She suffered a stroke in 1993 and was legally blind because of macular degeneration. She spent six days last month in an Austin hospital, where she was treated for a low-grade fever. "She just slipped away," family spokeswoman Elizabeth Christian said.
The full story is here: http://www.washingtonpost.com/wp-dyn/content/article/2007/07/11/AR2007071102146.html?hpid=topnews
Posted by Michael-in-Norfolk at Thursday, July 12, 2007