Clinton, Edwards and Obama agree to participate in historic debate on LGBT issues 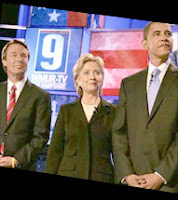 As PageOneQ is reporting, the agreement of three presidential candidates is a first time event in this country. No doubt the fundies will be foaming at the mouth and say all sorts of things about these candidates appearing on Logo. Here are the highlights:

Three leading candidates for the Democratic nomination for president will appear at a live, televised forum according to a statement released by the Human Rights Campaign. Senators Barack Obama and Hillary Clinton and former Senator John Edwards have agreed to appear at the event focusing on lesbian and gay issues. The event will be broadcast on LOGO, a cable TV station owned by Viacom. The station is a division of MTV Networks.
The event will take place August 9th at 9pm EST and will be broadcast live on television and via streaming video on line at LOGOonline. It will be hosted by co-panelists HRC president Joe Solmonese and musician Melissa Etheridge.
Posted by Michael-in-Norfolk at Wednesday, July 11, 2007

Joe Solomnese permits Hilary to expose herself on such a vulnerable issue, which she is already on record as "not suited for marriage."

If Bill were running again, I might take a chance on him, philandering dick and all, but Hilary lacks even Bill's modestly good judgment. She gives exceptionalism a new meaning (and special-interests a huge ego to feed).

But HRC has already "anointed" Hilary as Joe's friend of Dorothy. Hell, if Joe thinks Hilary is a friend of Dorothy, he's needs a vacation in Kansas. Being a political operative in a "human rights advocacy" organization, after serving NARAL, seems utterly confused to some of us. Maybe the Wizard can unbend Joe's bending knees, worshiping at the footstool of fools for political significance. That's why many of us prefer the ACLU over HRC. What has HRC done for GLBT? Well, not much. Some rhetorical. Closed-door pow-pows with Hilary. Undisclosed financial records. Private "executive" meetings. And moving into fancy Washington digs. But not a dime, not even a penny, to oppose any of the anti-gay marriage initiatives. Nope. All funds went to seven of Joe's favorite candidates.

Is HRC a "independent, human rights advocacy," or the political organization of Joe Solmonese and his lady friends at NARAL? Well, I think the answer is quite clear, since all seven candidates Joe funded were Democrats, but none spent on GLBT issues. HRC is Joe's personal PAC, not a "human rights advocacy," because no such organization would assume such partisan orientation at the exclusion of GLBT's core interests -- not even ACLU, nor Nature Conservancy, nor NGLTF, nor LAMDA. And I, like many, do not want a two-timing forked-tongue with very poor judgment as successor to Worst for "almost-as-bad, but not quite."

The Clintons and the Bush need to retire permanently. They've stolen enough public goodwill. Bill we like, despite his wandering dick, but Hilary only brought on the Gingrich Republican Revolution, and we cannot encourage another fiasco at her hands. It's one thing to two-time your wife, it's another to two-time the public.

I will be right here on the 9th, streaming LOGO. I want to see if I love John Edwards as much as I think I do.