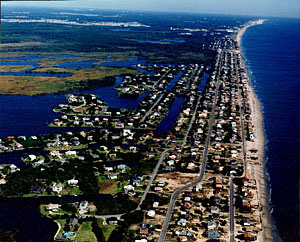 I did not post yesterday because Raymond and I went to the beach house of a friend’s family down in the Sandbridge area of Virginia Beach. We spent the late morning on the beach, then retreated indoors when a rain front came through and ultimately stayed for dinner.

Sandbridge is basically the area where the northern end of the barrier islands forming the Outer Banks of North Carolina connects with the mainland in southern Virginia Beach (the city’s southern boundary is the North Carolina line). The very southern portion consists of False Cape State Park, with the area northward made up of a slender peninsula (See photo above) lying between the Atlantic Ocean and Back Bay (also pictured above), which is the northern limit of Pamlico Sound. It’s about a 35-40 minute drive from our house in Norfolk.

My friend is a guy who I have known for over 16 years, a former law partner and current business partner in my title insurance company operation. As is often the case, we were just added into the extended family group of my friend and his sons, some of their friends, his sister and her son and his girlfriend, and my friend’s parents. Our visits are always relaxing and leave you feeling like you have been much farther away than just 35 miles or so. His family is amazingly interesting and nice, plus very accepting of gay couples. In fact his mother has two gay cousins, one of whom worked with the Beatles for years.

Once the rain set in, we spent the rest of the day and early evening on the second floor wrap around screened porch overlooking Back Bay. Part of the time my friend’s oldest son played guitar and sang songs he has written (he is incredibly talented and attended the Governor’s School for the Arts). One of his prized possessions is a guitar that once belonged to Paul McCartney that was a gift from one of his gay cousins. The rest of the time we talked of an amazing array of topics, ranging from my friend’s dad’s days commanding a naval vessel, gay rights issues, politics, the Bible, Hebrew and the Bible, and so on. It was a wonderful day.

They are such an amazing family and such wonderful people.
Posted by Michael-in-Norfolk at Sunday, July 08, 2007

The people I consider my family are actually non-biologically related friends. Ain't they the best?????