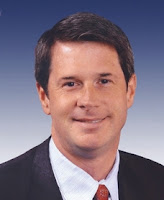 David Vitter, one of those "family values" members of the GOP who supported the Federal Marriage Amendment due to the Christianist fabricated need to protect the sanctity of marriage, apparently doesn't honor the sanctity of marriage in his own life. The Washington Post reports today that Vitter has confessed to his less than Godly conduct:
"Sen. David Vitter (R-La.) apologized last night after his telephone number appeared in the phone records of the woman dubbed the "D.C. Madam," making him the first member of Congress to become ensnared in the high-profile case.
The statement containing Vitter's apology said his telephone number was included on phone records of Pamela Martin and Associates dating from before he ran for the Senate in 2004.
Not surprisingly, Vitter has put out one of the typical meally mouth apology statements all so typical of these hypocrites:
"Several years ago, I asked for and received forgiveness from God and my wife in confession and marriage counseling," Vitter continued. "Out of respect for my family, I will keep my discussion of the matter there -- with God and them. But I certainly offer my deep and sincere apologies to all I have disappointed and let down in any way."
I feel sincere sorrow for Vitter's family, but none for this anti-gay hypocrite.
Posted by Michael-in-Norfolk at Tuesday, July 10, 2007