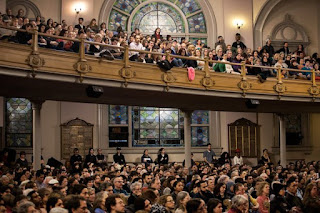 The reality is that Donald Trump received 46% of the votes of those who went out and voted on November 8, 2016.  Those voters represented 57.9% of eligible voters.  Do the math and the result is that Trump received votes from only 26.5% of the total electorate.  This is not a mandate and it surely does not equate to the earth moving as claimed by Der Trumpenführer and easily explains the low crowd turnout for the 2017 inauguration - an event that Trump likely viewed as his coronation.  The bottom line is that Trump is a minority backed president and that wittingly or not, he may be the catalyst needed to energize a great political renaissance where citizens once again realize that political engagement is a must and that complacency leads to horrific results.  A column in the New York Times looks at what might be the one bright spot in Trump's foul presidency.  Here are excerpts:

My friend Sam laughed when I told him I was going to spend my Saturday at a “Search for Meaning” festival at a Jesuit college in the heart of seriously secular Seattle. . . . all the keynote events at Seattle University were completely sold out. In the winter of the American soul, people thronged to hear advice on how to “live a life of significance and impact” and to “find meaning in times of change, challenge and chaos.”

I credit President Trump. Not because he seems any more evolved than the first earthworms now appearing in the cold soil of my garden. . . .  because the threats to truth, civility, rational thought and brotherly love coming from the White House have prompted a huge counterreaction.

It’s early, but we may be experiencing a great awakening for the humane values that are under siege by a dark-side presidency. People are going inward, to find something bigger than Trump, and outward, to limit the damage he inflicts on the country.

Trump has been good — indirectly — for a free press, an independent judiciary, high school civics, grass-roots political activity, cautionary tales in literature and theater, and spirituality. You don’t know what you’ve got, as the song says, till it’s gone — or nearly so.

Face it: We have become a lazy, aging, fairly ignorant democracy. Even in the most turbulent election in modern history, about 90 million eligible voters didn’t bother to cast a ballot — the basic task of citizenship. Trump took his 46 percent of those who did vote, many of whom believe fake-moon-landing-level lies, and has tried to act like the earth moved, as he said on Tuesday. It did, but not in the ways that he meant it.

It would be immodest, even overtly Trumpian, to boast about the huge circulation gains at the not-failing New York Times, or the robust support for our competitors, The Wall Street Journal and The Washington Post. But let’s just say having a man who told an average of four false or misleading statements a day for the first month of his presidency has been good for those the president calls enemies of the people.

The hottest book of the Trump era, George Orwell’s “1984,” is headed for Broadway. “The party told you to reject the evidence of your eyes and ears,” Orwell wrote, with chilling prescience. Also sailing out of bookstores: Sinclair Lewis’s “It Can’t Happen Here,” Ray Bradbury’s “Fahrenheit 451” and my personal favorite, Philip Roth’s “The Plot Against America.”

Trump fright has produced a deep dive into history. Millions now know that “enemy of the people” was a Soviet-era threat used by Stalinist thugs. And “America First,” Trump’s governing theme, was a slogan of Nazi sympathizers in the United States just before World War II.

Which brings us to civics. One of the great failures of late has been the diminishment of this vital owner’s manual for citizenship. Only 23 percent of eighth graders scored at or above proficiency in civics in a survey last year. Almost two-thirds of adults cannot name all three branches of government.

But now students are clamoring to talk about government and politics. The kids are demanding that their teachers do something to prevent another generation of politically illiterate citizens from coming of age. They are also marching in the street, along with their parents, who have already pulled off one of the largest political demonstrations in American history.

In stepping on American values, Trump has prompted people to find out more about those values, and ultimately to defend them. The high to his low is an unexpected renaissance.