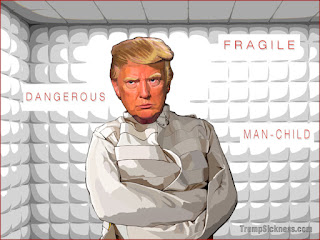 My personal view is that Donald Trump, a/k/a Der Trumpenführer on this blog, is mentally ill.  At best he suffers from narcissistic personality disorder.  At worst, he flaming insane.  Readers can decide where they place him on the range of insanity.  I suspect that even many Trump voters concede that we are not witnessing a normal presidency.  The other alternative, as suggested by conservative columnist, Jennifer Rubin, is that Trump is compromised by the Russians either due to blackmail information or he actually colluded with Russian operatives to swing the 2016 election in his favor. If this latter alternative is true, then Trump's seemingly crazy outbursts are aimed at changing the topic and/or distracting the media.  The reality is that no matter how hard Trump tries, the pall of the Russian connection is not going to be pushed away.  Here are highlights from Rubin's column:

In the course of less than a week we’ve gone from “Trump presidency on the rocks” to “What a normal speech!” to “How many Trump associates had contact with the Russians, and why did they lie about it?” to “Trump was bugged, really?!?”

There are several explanations — not necessarily mutually exclusive — for the latest outburst from the president.

First, he is increasingly out of touch with reality. Just as he obsessed over the crowd size at his inauguration and the fictional illegal voters upward of 3 million, Trump’s mammoth ego cannot take the daily drumbeat of attacks and accusations. When adversity strikes — as it did with new allegations concerning Attorney General Jeff Sessions, who was forced to recuse himself from any campaign-related investigation — he becomes unhinged and paranoid. He can stick to a teleprompter speech for an hour, but soon reverts to form.

A variation on the first possibility would be that Trump correctly realizes the intelligence community has a good deal more information on what contacts his associates had with Russians than he does. A New York Times story last week confirmed that the intelligence community also has intercepts of Russian officials discussing their contacts with Trump associates. Trump, under this theory, is panicked. An exaggerated, unsupported claim from a right-wing provocateur and gadfly Mark Levin that Trump was directly wiretapped is enough to set him off into a Twitter frenzy. As they said about Richard Nixon, even paranoids have enemies.

Another explanation is that Trump, as he does when things go wrong (the Sessions recusal, disarray on tax and health-care legislation, accusations about his foreign holdings), deliberately creates distractions. He’d rather the media chatter about whether he is sane than focus on the need to obtain his taxes to determine what connections he and his family have to Russia.

And finally, it is possible that he is right that Trump communications were under investigation — but only up to a point. . . . . . Apart from the server story, news reports have suggested, as a TIME story did, that “as major banks in America stopped lending him money following his many bankruptcies, the Trump organization was forced to seek financing from non-traditional institutions. Several had direct ties to Russian financial interests in ways that have raised eyebrows.” (Trump denies he has any ties to Russia. “I can tell you, speaking for myself, I own nothing in Russia. I have no loans in Russia. I don’t have any deals in Russia,” he said recently, leaving open the possibility that he and/or his sons have ties to Russians operating outside of Russia.)

After Trump’s Twitter outburst some lawmakers, like Sen. Ben Sasse (R-Neb.), chose to take him “seriously,” that is, to call for proof of his claims. Others argued that his accusations only underscored the need for a definitive, independent investigation conducted by either a commission with subpoena power or a special prosecutor named by the deputy attorney general.

Realizing their error in inviting more scrutiny, Sean Spicer tried to walk back the allegations Sunday morning. He called for Congress — which is already investigating Trump’s Russia connection — to look into improper surveillance during the campaign. He almost begged the press to drop it, saying that no further remarks on the topic would be forthcoming. Good luck with that.

Trump inadvertently emphasized that at the core this is about whether the intelligence community has discovered the president of the United States is compromised. That cannot very well be left solely to congressional partisans or to a Justice Department that reports to him.