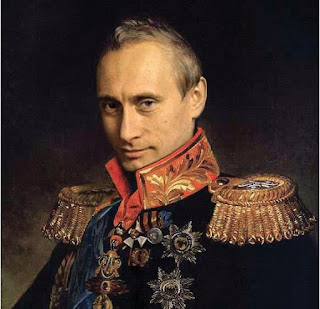 As noted before, I suspect that Trump and his henchmen colluded with Russia in an effort to throw the 2016 election to Trump.  Many outlets have reported on Vladimir Putin's hatred towards Hillary Clinton who had rightly criticized Russia's rigged elections that now maintain Putin in power.  Add to this Putin's desire to undermine American democracy and/or belief that with Trump in the White House he'd have a stooge that he could easily manipulate. Now, with Trump ensconced in the White House and America's government in chaos, Putin seems to be pulling back on his support for Trump.  Whether this move is to give the appearance that there was no Trump-Putin alliance or to bring further chaos to Washington remains to be seen.  In any event, Kremlin controlled media has gone from lauding Trump to trashing him.  Perhaps if he had not been blinded by his own narcissism, Trump would have known that only a fool would trust Vladimir Putin.  Here are excerpts from Politico:

Kremlin-controlled news outlets used to root for Donald Trump’s election. Now they’re reveling in the chaos and division of his early presidency.

“Sessions Scandal: ‘U.S Headed to Constitutional Crisis,’” reads a March 3 headline on the website of the Kremlin-funded English-language network RT.

“America is in the grips of hatred,” the Russian television commentator Dmitry Kiselyov told viewers of the Rossiya 1 network on Sunday night. The popular host, appointed directly by Russian President Vladimir Putin, suggested the political discord could lead to violence in gun-friendly America — “a dangerous combination with free-flowing firearms,” he said.

It’s not that the Kremlin-controlled outlets which all but explicitly rooted for Trump to defeat Hillary Clinton last fall have changed their view of the New York mogul. It’s that Moscow’s main goal was always to undermine the U.S. political system, regardless of who is in the White House, experts said.

“The Russian government is savoring the severe damage to America’s international image as a result of the tumultuous first weeks of the Trump administration’s tenure,” said Andrew Weiss, a former Clinton White House National Security Council official for Russian affairs. That’s particularly true given dimming hopes in Moscow that Trump can now deliver on his pledge to cooperate with Putin.

[S]hifts in how Russia reports on U.S. politics can offer important clues about Putin's latest views of America.  And at the moment, Putin seems to be reveling in the sense of crisis gripping U.S. politics.  “Are Trump’s policies dividing America more than ever?” asked an RT headline last month.

Other stories in various Russian outlets have spotlighted Trump’s dismal poll numbers, criticized his immigration crackdown and even made fun of his handshake. Russian television has replayed biting "Saturday Night Live" sketches spoofing the new president.

The uproar over Trump’s alleged ties to Moscow has put Russian news outlets in an awkward spot. On one hand, they are celebrating the confusion surrounding charges that Trump and his associates might have had illicit ties to Moscow. . . . At the same time, Moscow’s media reject such talk as McCarthyism, and they point a finger at former President Barack Obama as a sinister figure using Russia as a means of undermining Trump.

“If you recall how they were applauding Trump, I think 95 times they stood up,” said Edward Lozansky, president of the American University in Moscow. “Even during the Brezhnev time I don't recall that the delegates to the party congress stood up and gave standing ovations 95 times.”

Posted by Michael-in-Norfolk at Wednesday, March 08, 2017