Trump Has Mainstreamed the Alt-Right, Racism and Bigotry 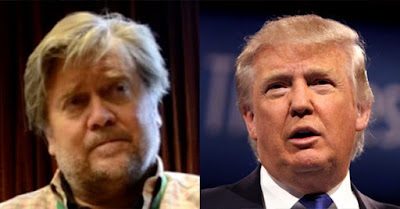 Threats against Jewish community centers across the country have sky rocketed, anti-LGBT violence is on the rise, and the dehumanization of Muslims and Mexican immigrants has the imprimatur of the White House.  Yet, many Republicans continue to close their eyes to what is happening and most certainly disavow any responsibility for the hate and ugliness that is now being mainstreamed and made acceptable (at least in some quarters) by Der Trumpenführer and his inner circle, many of whom are reminiscent of the thugs and losers who comprised Hitler's inner circle.  I believe that Republicans and other Trump voters need to be held personally accountable for what they have set in motion be it due to their own hatred towards others who are different, their laziness in not bothering to educate themselves on what they were voting for, or general indifference.  Republicans like to talk about "personal responsibility" and "holding people accountable,"so it's time to apply their words against them.  A column in the Washington Post underscores the responsibility of Trump and his Republican enablers in mainstreaming white supremacists and other hate merchants.  Here are column excerpts:

But here’s the reality: The alt-right’s deep influence over this White House is on display daily — in Trump’s rhetoric and his administration’s policies. The alt-right influence on Trump matters: it means the most powerful man in the world is under the influence of a racist and white nationalist movement. And conservatives should reckon with this more forthrightly.

For instance, note this podcast that the Washington Post’s Jonathan Capehart conducted with American Conservative Union president Matt Schlapp. Capehart pointed out that Stephen K. Bannon and Stephen Miller are Trump’s top White House advisers, and asked: “Doesn’t that mean, that despite the concerns, the alt-right is now mainstreamed, if not the power within the White House?” Schlapp flatly denied that the alt-right had been mainstreamed in this manner.

Bannon — who is now Trump’s most influential adviser — told me last summer, when he was chairman of Breitbart, that his site was “the platform for the alt-right.” Capehart questioned Schlapp about this, but Schlapp argued, implausibly, that this is not as significant as it appears.

Yet Breitbart was and remains one-stop shopping for readers looking for anti-immigrant, anti-Muslim, anti-refugee rhetoric and disinformation, as well as stories about “black crime.”

This echoed similar head-in-the sand denials that were on full display last month at the ACU’s Conservative Political Action Conference.

The reality is that it is under Bannon’s influence that the administration has taken its actions that most thrill the alt-right, most notably his moves to step up deportation of undocumented immigrants, and ban refugees and migrants from Muslim-majority countries.

When Bannon and I spoke this summer, he tried to deny to me that the alt-right is a white nationalist movement, although he did concede that white nationalists and anti-Semites could be attracted to “some of the philosophies of the alt-right.” But, as I have written after Trump tapped him to head up his campaign, Bannon nonetheless praised the deeply Islamophobic ethno-nationalism on the rise in Europe, like the National Front in France, led by far-right presidential candidate Marine Le Pen.

And then there’s Trump’s choice of Jeff Sessions as Attorney General. During the transition, alt-right leaders were delighted with the Sessions pick, pointing to his opposition to immigration as well as their hope that he would stop enforcing civil rights laws and might even prosecute Black Lives Matter protesters.

As Emily Bazelon writes, Sessions has long been a devoted Breitbart reader, and met regularly with the site’s writers. Trump’s dark vision of America as besieged by inner city crime, immigrants, and refugees, Bazelon notes, “provides clear justification for policies that will advance Sessions, Bannon and Miller’s divisive nationalism.”

Trump’s false claims about voter fraud are straight out of the ugly maw of alt-right meme-making, portraying supposed voter fraud as a scourge perpetrated by African-Americans and undocumented immigrants — a possible signal that a crackdown on voting rights is coming, one that Sessions would likely help carry out from the Justice Department.

[T]he reality is that Trumpism would not exist without the alt-right. Conservatives can pretend it’s fringe and has little to no influence on the Trump administration — but the proof is in the policy.