The Cowardice and Mindlessness of Trump Supporters 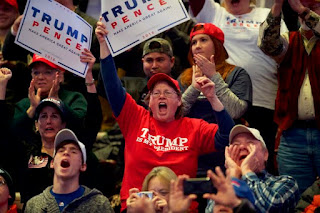 Over the years that I have been writing this blog, almost without exception the negative comments are left by (i) Christofascists or (II) right wing types.  In both instances the comments are left anonymously since these brave folks are too afraid to attach their names to the batshitery they spew. Gutless cowards as well as ignorant and/or living in a right wing news bubble.  Today an anonymous comment was left that sounded like it was straight from Brietbart of Fox News,  Here's a sampling:

Pretty big deal DOJ investigating Trump's campaign to ties with Russia, no way President Obama did not know about this. Wiretapping stories all over the newspapers like the New York times, so if they are to be believed then wiretapping did go on. Trump campaign people worked at Trump Towers including Michael Flynn who we know was wiretapped because his phone conversation was leaked to the Public, another crime, worked at Trump Towers. We know someone was listening because the conversation was leaked. These are all facts think you better go back and do some research.

Let's review the true facts and make clear how clueless this cowardly character is in fact.  If anyone needs to do some research, it is this ignoramus.  A good start would be to change the dial from Fox News and/or Breitbart and similar purveyors of fake news.  Here's a review:

First, the wiretapping stories "all over the newspapers" are merely a reaction to Trump's unfounded accusations about Barack Obama ordering a wire tap of Trump Tower.  Most of the coverage is that wire tapping did NOT go on.  Obama spokesmen have denied it, Republicans in Congress have indicated that they have heard nothing to support Trump's claims. and the former Director of National Intelligence and the Director of the FBI have said Trump's claims are not consistent with the facts - a polite way to say Trump is a liar.

What I find both frightening and mind boggling is that Trump's campaign officials and flunkies were so stupid that they did not realize that they were communicating with individuals under wire taps and other kinds of surveillance such as that conducted by the British and Dutch intelligence services. These folks make the Three Stooges look brilliant.

Lastly, if the Justice Department or FBI did conduct a wire tap, (which seemingly was not the case from what is known) that means that the FISA Court found probable cause that crimes were being committed.  If this did in fact, occur, Trump and/or his henchmen has/have very serious problems.

The conclusion?  Despite the rant of the apparent Trump supporter, there has been ZERO evidence of wire taps aimed at Americans.  Those who have been caught communicating with the Russian were caught due to wiretaps and surveillance against the Russians involved, NOT the Americans.   Perhaps if the author of the comment got his head out of his ass and switched channels/radio stations to a legitimate news outlet, he/she would have known what I laid out.
Posted by Michael-in-Norfolk at Tuesday, March 07, 2017