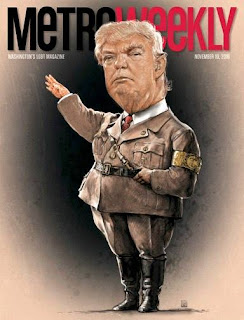 Blow back continues against Der Trumpenführer's wild and untrue claims that the phones in Trump Tower were wire tapped by the Obama administration.  The claims are yet more of Trump's Hitler-like lies that seek to rile up his base and distract from growing questions about Trump's ties to Russia and whether his campaign colluded with Russian hacks of the DNC and the Clinton campaign aimed at throwing the presidential election to Trump.  If the collusion took place - I personally suspect that it did - then Trump must be growing increasingly desperate to change the topic of media focus and to whip his supporters into a frenzy where they will refuse to believe whatever truths eventually come out.  The drama has grown as the FBI Director has called on the Justice Department to reject Trump's false claims.  Here are highlights from the New York Times on events that unfolded yesterday:

The F.B.I. director, James B. Comey, asked the Justice Department this weekend to publicly reject President Trump’s assertion that President Barack Obama ordered the tapping of Mr. Trump’s phones, senior American officials said on Sunday. Mr. Comey has argued that the highly charged claim is false and must be corrected, they said, but the department has not released any such statement.

Mr. Comey, who made the request on Saturday after Mr. Trump leveled his allegation on Twitter, has been working to get the Justice Department to knock down the claim because it falsely insinuates that the F.B.I. broke the law, the officials said.

Mr. Comey’s request is a remarkable rebuke of a sitting president, putting the nation’s top law enforcement official in the position of questioning Mr. Trump’s truthfulness. The confrontation between the two is the most serious consequence of Mr. Trump’s weekend Twitter outburst, and it underscores the dangers of what the president and his aides have unleashed by accusing the former president of a conspiracy to undermine Mr. Trump’s young administration.

In addition to being concerned about potential attacks on the bureau’s credibility, senior F.B.I. officials are said to be worried that the notion of a court-approved wiretap will raise the public’s expectations that the federal authorities have significant evidence implicating the Trump campaign in colluding with Russia’s efforts to disrupt the presidential election.

Mr. Comey has not been dealing directly with Attorney General Jeff Sessions on the matter, as Mr. Sessions announced on Thursday that he would recuse himself from any investigation of Russia’s efforts to influence the election.

It is not clear why Mr. Comey did not issue a statement himself. He is the most senior law enforcement official who was kept on the job as the Obama administration gave way to the Trump administration. And while the Justice Department applies for intelligence-gathering warrants, the F.B.I. keeps its own records and is in a position to know whether Mr. Trump’s claims are true. While intelligence officials do not normally discuss the existence or nonexistence of surveillance warrants, no law prevents Mr. Comey from issuing the statement.

Mr. Trump’s demand for a congressional investigation appears to be based, at least in part, on unproven claims by Breitbart News and conservative talk radio hosts that secret warrants were issued authorizing the tapping of the phones of Mr. Trump and his aides at Trump Tower in New York.

The claims about wiretapping appear similar in some ways to the unfounded voter fraud charges that Mr. Trump made during his first days in the Oval Office. Just after Inauguration Day, he reiterated in a series of Twitter posts his belief that millions of voters had cast ballots illegally — claims that also appeared to be based on conspiracy theories from right-wing websites.

As with his demand for a wiretapping inquiry, Mr. Trump called for a “major investigation” into voter fraud, saying on Twitter that “depending on results, we will strengthen up voting procedures!” No investigation has been started.

Asked whether such a warrant existed, James R. Clapper Jr., a former director of national intelligence, said on NBC’s “Meet the Press,” “Not to my knowledge, no.”  “There was no such wiretap activity mounted against the president-elect at the time, as a candidate or against his campaign,” Mr. Clapper added.

Let's be candid.  Trump is a liar and a demagogue plain and simple.  Anything he says should be considered to be a lie until proven otherwise.
Posted by Michael-in-Norfolk at Monday, March 06, 2017