Are Liberals Underestimating the Danger of the Alt-Right? 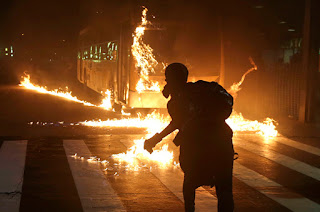 Throughout my years of activism, in educational issues, as a Republican activist, and now as an LGBT activist, I have personally believed in a confrontational approach while armed with facts and data is always preferred to a polite and non-confrontational approach.  Yes, you hurt some feelings, but sometimes feelings need to be hurt and lies and hypocrisy need to be harshly confronted.  In the current political atmosphere where Republicans, Der Trumpenführer, and their Alt-Right allies are destroyng environmental protects, education and degrading healthcare coverage - mental health coverage will no longer have to be covered - "playing nice" is not enough.  Indeed, history and the rise of past fascist regimes shows that liberals need to grow a spine and cease being afraid of confrontation.  If "friends" are offended and are willing to be complicit in immoral actions, then you do not need them as friends.  A column in Salon looks at these issues:

Since the election of Donald Trump as president, liberals and leftists have been discussing how to best respond to American conservatism’s transformation from a shopworn, Cold War, anti-government philosophy into something else.

To the anarchists and socialists who consider themselves part of the global “antifa” movement (an abbreviation for “anti-fascist”), the transition currently taking place on the right is all too familiar. The rise of the alt-right and white nationalism within the U.S. is something the mainstream left doesn’t take seriously enough, they say, even as many Democrats compare Donald Trump to Adolf Hitler.
If it is true that the civic nationalism of Trump and his top strategist Steve Bannon are helping to lay the groundwork for a more radical right — intentionally or otherwise — then their self-described opponents on the left need to do more than wear safety pins and post Facebook denunciations of the president they didn’t vote for say the antifa advocates.

Instead of merely talking among themselves about opposing racism, say the anti-fascists, leftists need to take direct action to make being a white nationalist as difficult as possible. That’s why many antifa proponents have concentrated their efforts on tactics such as targeting the financial means of support for websites they see as enabling or promoting fascist views; they have even engaged in acts of physical assault against members of the far right.

“Only by fighting and destroying fascism can we actually defeat it,” an anonymous member of the website It’s Going Down told Salon via email. . . . they take politics much more soberly than their less extreme counterparts do. For the antifas, understanding that white nationalists are deadly serious about instigating a “racial holy war” is the key to countering them.

“During the rise of the Nazi regime in Germany, while anarchists and communists were literally fighting the fascists in the streets, the liberals and social democrats attempted to debate the Nazis point for point in the halls of power,” the anonymous activist continued. “This did nothing, and also normalized the positions of the Nazis and also made them into legitimate positions.”

“Liberalism [has] proven itself unable to prevent the rise of fascism over and over again,” the activists wrote. “By the time liberals are comfortable with cracking down on fascism, it’s almost always too late.

Beyond targeting far-right activists’ financial means and showing up to physically confront them at their events, many antifa activists have made it their mission to expose the true identities of popular alt-right figures so they cannot hide behind pseudonyms. The Nebraska activists provided an example of this tactic in December when they exposed the identity of Cooper Ward, a University of Nebraska student who was outed as the co-host of a popular neo-Nazi podcast. He quit the podcast program after being identified and hasn’t returned.

Antifa activists also take issue with liberals who think that letting people with racist or anti-Semitic views state them publicly somehow serves as a method of relieving societal pressures. Instead, as an anonymous essayist on the anarchist website CrimethInc wrote, such expressions merely increase the reach and influence of the far right:

Fascists are only attempting to express their views “peacefully” in order to lay the groundwork for violent activity. Because fascists require a veneer of social legitimacy to be able to carry out their program, giving them a platform to speak opens the door to their being able to do physical harm to people. Public speech promoting ideologies of hate, whether or not you consider it violent on its own, always complements and correlates with violent actions. By affiliating themselves with movements and ideologies based on oppression and genocide, fascists show their intention to carry on these legacies of violence — but only if they can develop a base of support.

By definition, the antifa arguments are both radical and controversial. The unanswered question is whether liberals, moderates and others who oppose the radical right can learn something from the antifa activists’ confrontational stance. Or will the violent tactics they advocate only worsen tensions in a divided society and beget more violence?

I do not condone violence.  That said, sometimes quiet, peaceful protests may not be enough, especially when confronted with white supremacists and alt-right violence and viciousness.
Posted by Michael-in-Norfolk at Saturday, March 11, 2017