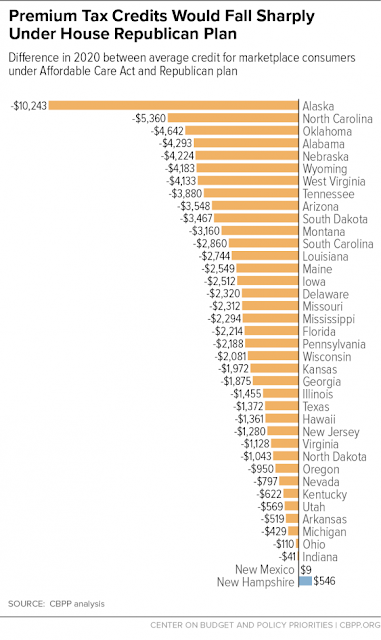 Paul Ryan - one of the most dishonest men in Congress, in my view - pretends that the Republican abortion that he and his party are pushing makes healthcare "more affordable" and gives Americans "freedom" to select a healthcare plan that fits their needs.  The truth, of course, is something far different and underscores the reality that if Ryan's lips are moving, it is a near 100% bet that he's lying.  The chart above shows how residents in some states would be especially hard hit in the drop in subsidies that would otherwise assist them in paying health insurance premiums. The irony is that some of the states hardest hit are so-called "red states" that voted for Der Trumpenführer.  As a column in the New York Times notes, the poor and the elderly (who could be charged far more) are the hardest hit.  The main beneficiaries?  The wealthy who will see significant tax cuts in accordance with Ryan and the GOP's reverse Robin Hood agenda.  Here are column highlights:

It has long been obvious to anyone following health policy that Republicans would never devise a workable replacement for Obamacare. But the bill unveiled this week is worse than even the cynics expected; its awfulness is almost surreal. And the process by which it came to be tells you a lot about the state of the G.O.P.

Given the rhetoric Republicans have used over the past seven years to attack health reform, you might have expected them to do away with the whole structure of the Affordable Care Act — deregulate, de-subsidize and let the magic of the free market do its thing. This would have been devastating for the 20 million Americans who gained coverage thanks to the act, but at least it would have been ideologically consistent.

But Republican leaders weren’t willing to bite that bullet. What they came up with instead was a dog’s breakfast that conservatives are, with some justice, calling Obamacare 2.0. But a better designation would be Obamacare 0.5, because it’s a half-baked plan that accepts the logic and broad outline of the Affordable Care Act while catastrophically weakening key provisions. If enacted, the bill would almost surely lead to a death spiral of soaring premiums and collapsing coverage. Which makes you wonder, what’s the point?

Obamacare rests on three main pillars. Insurance companies are regulated, prevented from denying coverage or charging higher prices to Americans with pre-existing conditions. Families receive subsidies linked to both income and premiums, to help them buy insurance. And there is a penalty for those who don’t buy insurance, to induce people to sign up even if they’re currently healthy.

Trumpcare — the White House insists that we not call it that, which means that we must — preserves some version of all three elements, but in drastically, probably fatally weakened form.

Insurers are still barred from excluding the sick, but they’re allowed to charge older Americans — who need insurance the most — much higher premiums.

Subsidies are still there, in the form of tax credits, but they’re no longer linked to either income (as long as it’s below $75,000) or the cost of insurance.

Affluent young people might end up saving some money as a result of these changes. But the effect on those who are older and less affluent would be devastating. AARP has done the math: a 55-year-old making $25,000 a year would end up paying $3,600 a year more for coverage; that rises to $8,400 for a 64-year-old making $15,000 a year. And that’s before the death spiral.

The result would be even more people dropping out. Republicans have been claiming that Obamacare is collapsing, which isn’t true. But Trumpcare, if implemented, would collapse in a Mar-a-Lago minute.

How could House Republicans under the leadership of Paul Ryan, who the media keeps assuring us is a smart, serious policy wonk, have produced such a monstrosity? Two reasons.

First, the G.O.P.’s policy-making and policy analysis capacity has been downgraded to the point of worthlessness. There are real conservative policy experts, but the party doesn’t want them, perhaps because their very competence makes them ideologically unreliable — a proposition illustrated by the rush to enact this bill before the nonpartisan Congressional Budget Office can estimate either its costs or its effects. Basically, facts and serious analysis are the modern right’s enemies; policy is left to hacks who can’t get even the simplest things right.

Second, Republicans seem to have been undone by their reverse-Robin-Hood urges. You can’t make something like Obamacare work without giving lower-income families enough support that insurance becomes affordable. But the modern G.O.P. always wants to comfort the comfortable and afflict the afflicted; so the bill ends up throwing away the taxes on the rich that help pay for subsidies, and redirects the subsidies themselves away from those who need them to those who don’t.

[Y]ou might ask what happened to all those proclamations that Obamacare was a terrible, no good system that Republicans would immediately replace with something far better . . . . the answer, of course, is that they were all lying, all along — and they still are. On this, at least, Republican unity remains impressively intact.