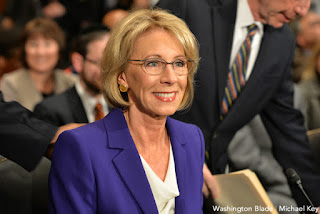 I opposed Betsy DeVos' appointment as the Secretary of Education in light of her history of working to defund public education and shift tax dollars to private and religious schools.  Then, of course, their is the issue of the millions of dollars that her family has given to anti-gay groups over the years. That said, DeVos reportedly opposed the reversal of the Obama administration's positions on Title IX and transgender rights and had to be "taken to the woodshed" by Der Trumpenführer at the Oval Office to get her on board with the changes which will inflict real harm on real individuals.  Now, in an apparent show that she represents the interest of all citizens, not just racists and extreme homophobes, DeVos meet with LGBT groups to discuss the issue of transgender rights.  Do I trust the woman?  Definitely not, but she at least is showing signs that she realizes the scope and responsibilities of her position.  Here are excerpts from the Washington Blade:

Representatives from a trio of LGBT organizations and families with transgender kids met Wednesday with Education Secretary Betsy DeVos in the aftermath of the Justice and Education Departments revoking Obama-era guidance assuring transgender students access to the bathroom consistent with their gender identity.

Mara Keisling, executive director of National Center for Transgender Equality, said the meeting came about as a result of the Trump administration rescinding the guidance, which informed discriminating against transgender students would violate Title IX of the Education Amendments of 1972.

“They made an arbitrary, political, ideological decision to hurt trans youth, so we wanted to talk to them about enforcing the law that they’re statutorily required to enforce,” Keisling said.

The meeting was set up as a result of efforts by Equality Michigan, which is the state LGBT group for DeVos’ home state of Michigan and where she once served as head of the Michigan Republican Party. According to Equality Michigan, the Education Department informed the organization on Friday she had agreed to the meeting.

Stephanie White, executive director of Equality Michigan, said her organization sought out the meeting to convey the “profound negative consequences” of the withdrawal of the guidance protecting transgender students.

“We also ensured that the secretary heard from transgender students and their parents directly about the impact of discrimination and harassment at school,” White said. “We wanted her to understand that these are life and death issues for transgender young people across the country and that we will not waver or compromise in our commitment to ensuring that every student, regardless of their gender identity, is provided with equal protection and opportunity to thrive.”

In a statement, DeVos said she’s “grateful for the opportunity” to speak with families and LGBT rights supporters “about their concerns, thoughts, fears and suggestions.”

“Every school and every school leader has a moral responsibility to protect all students and ensure every child is respected and can learn in an accepting environment,” DeVos said. “I remain committed to advocating for and fighting on behalf of all students. Today’s meeting was compelling, moving and welcomed, and part of an ongoing dialogue with families and students throughout the country.”

“That’s where the guidance is, that’s who has to enforce Title IX and that’s who allegedly cares about students,” Keisling said, adding she was unsure if any effort was made for LGBT groups to meet with Sessions or LGBT groups.