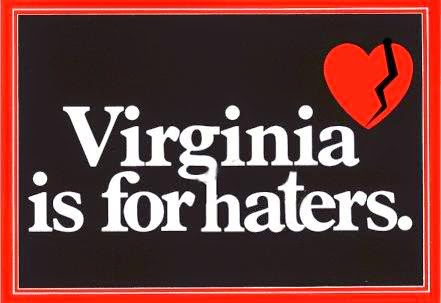 I continually wonder WTF is wrong with the voters of Del. Bob Marshall's district that they keep electing such a lunatic to the House of Delegates.  The man never introduces common sense bills, but instead every year introduces one or more bills that open the state and the Republican Party of Virginia to ridicule and derision.  As noted recently, this year he has introduced two anti-gay bills - both supposedly to protect "religious freedom" - which seek to put "godly Christians" above the laws that govern everyone else.  Indeed, Marshall is so extreme it's a wonder that he hasn't come out singing the praises of the shooter in the Paris massacre at the offices of Charlie Hebdo (Catholic League lunatic William Donohue has said the victims brought on - dare we say deserved - their own deaths since they offended religious sensibilities).  A piece in Slate shows how Marshall again has brought horrific coverage to Virginia.  Here are excerpts:

Nearly a year ago, Kansas legislators quietly attempted to legalize anti-gay segregation, abandoning the effort only after a national wave of outrage arose. Now a Republican delegate in Virginia is attempting to replicate Kansas’ effort—with a bill so extreme, so radically and viciously anti-gay, that it makes Kansas’ measure look moderate by comparison.


The Virginia bill, introduced by Del. Bob Marshall, is actually quite ingenious in its complete degradation of gay citizens. Like every “religious liberty” measure introduced over the past year, its true intent is to legalize discrimination against gay people. But whereas most of those bills attempted to allow discrimination in the realm of gay marriage—permitting, for instance, a florist to refuse to provide flowers for a gay couple’s wedding—the Virginia bill has no such limitation.

Instead, Marshall’s measure would attach a “conscience clause” to any “license, registration, or certificate” obtained from the commonwealth, whether by a private business or a government agency.

This clause would allow all workers to refuse to “perform, assist, consent to, or participate in any action” that would “violate the religious or moral conviction of such person with respect to same-sex ‘marriage’ or homosexual behavior.” (Emphasis mine—though the scare quotes around “marriage” are in the bill.) In other words, workers in the state of Virginia need only declare that interacting with people who partake in “homosexual behavior” violates their “moral conviction”—and they will be free to turn them away.

Because the bill applies to both private and public enterprises, and because these enterprises almost always need some kind of “license, registration, or certificate” from the government, its reach is essentially endless.
Marshall, one of the more extreme anti-gay legislators in America, has a long track record with these kinds of bills. . . . Marshall is a fanatic, and it’s unclear if his new bill stands a chance of passing the heavily Republican House of Delegates. Still, Marshall’s measure is a useful reminder of the profound anti-gay animus that underlies every attempt to curtail gay rights in the name of religious freedom. No matter the rationalizations from the far-right media, bills promoting “religious liberty” are almost always simply pretext, a ploy to permit the debasement of gay citizens under the guise of principled “dissent.”

Conservatives have spent decades attempting to disguise their hatred of gays in the camouflage of sincerely held religious beliefs. Marshall and his allies unintentionally blow their cover, revealing the rank animosity behind their ostensibly respectable views. I have long insisted that “religious liberty” is nothing but a euphemism for a special right to discriminate against gay people. Thanks to legislators like Marshall, that once-controversial proposition is becoming more undeniable with each passing day.

It is time for decent people and respectable businesses to start avoiding Marshall's district in every way possible and while doing so, they need to make it clear that they won't return until Marshall is out of office permanently.
Posted by Michael-in-Norfolk at Friday, January 09, 2015

My name is Don Shaw and I am running to #RetireBobMarshall in 2015! Contributions to my campaign are graciously accepted at http://www.shawfordelegate.com/contribute - also please "like" my campaign's Facebook page at http://www.facebook.com/ShawforDelegate Thank you for your support!