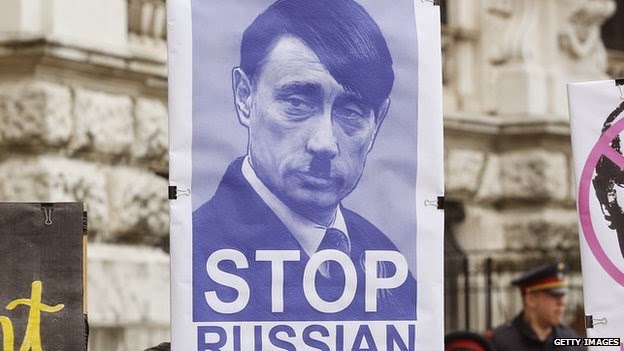 At the risk of beating a dead horse, previous predictions that Vladimir Putin was following the game plan Adolph Hitler used to justify Nazi Germany's move into Czechoslovakia in 1938 now have been substantiated.  NATO officials are reporting that Russian military forces are operating inside Ukraine's borders.  While Barack Obama has refrained from calling the move an invasion, it is hard to know what else to call it.  Russian military are inside the country without permission and taking armed action against Ukraine's forces.  The whole situation is a frightening case of repeating itself and one wonders if the west and NATO will respond with appeasement as happened 76 years ago.  The New York Times comments on Putin's lies and dangerous aggression.  Here are excerpts:

The evidence has been mounting for some time, but there is no longer any doubt: Russian troops are in Ukraine, not as volunteers, as the rebel commander in Donetsk would have the world believe, but in units equipped with mobile artillery and heavy military equipment.

A senior NATO officer reported on Thursday that the alliance had monitored a “significant escalation” in Russia’s military “interference” in Ukraine, and that well over 1,000 Russian soldiers are operating inside the southeast of the country. The officer, Brig. Gen. Nico Tak, called it “interference,” presumably because “invasion” would mean an all-out military assault. But, by any name, it is a large and unacceptable escalation of Russia’s aggression against Ukraine.

[A]mbassador to the United Nations, Samantha Power, was more blunt in her address Thursday to the Security Council, where she described Russia’s actions as “a deliberate effort to support, and now fight alongside, illegal separatists in another sovereign country.” That should be the reality guiding Mr. Obama when he meets with NATO allies in Wales next week.

NATO suspects the Russian goal is to prevent a military defeat of the rebels and freeze the conflict in an open-ended cease-fire, with Russia left in effective control of Ukraine’s industrial heartland, following the template of Russia’s frozen conflicts with Moldova and Georgia. But Russia’s motive is not the issue here. It is Russia’s violation of a cardinal principle of the international order since World War II — states do not seize territory by force.

Mr. Putin has played his dangerous game in Ukraine with cunning and deceit since the ouster in February of the corrupt Viktor Yanukovych lost him a Ukrainian president he could manipulate. First he annexed Crimea outright. Shocking and outrageous as that was, at least no blood was shed; Mr. Putin claimed that history and a Russian population as justification for that seizure. The Western reaction was limited to modest sanctions.

After the rebels shot down a Malaysian jetliner with a Russian missile, and after Kiev made gains against the rebels, Russia’s involvement became more overt, with reports of artillery fire across the border, armored columns crossing into Ukraine and Russian soldiers caught or killed inside Ukraine. The United States and the European Union ratcheted up the sanctions, but Mr. Putin continued to deny any involvement. He will no doubt deny the latest evidence as well, and will cynically claim some Ukrainian or Western plot.

Comments from European leaders on Thursday showed they recognize the danger of this moment. European Union leaders meeting on Saturday must join the United States in expanding the economic sanctions. France should seriously reconsider delivering the Mistral assault ships it has sold Russia. And when NATO leaders gather next week, they should give strong reassurances to NATO members along Russia’s borders that they will be protected should Moscow turn its attentions on them.

Appeasing bullies only makes them increase their bad behavior.  The disaster of the 1930's ought to remind all involved of this reality.