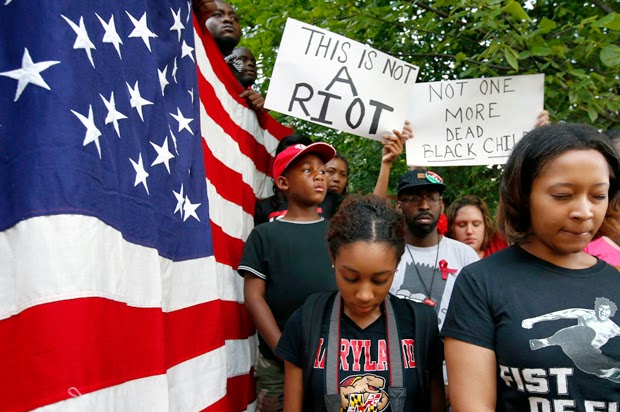 Despite the claims by some - typically white pundits who love to pontificate and hear their own voices - that America has transformed itself into a post racial society, the truth is that racism remains alive and well.  Indeed, the Republican Party and falsely named "Christian" family values organizations work diligently to keep it alive and to whip up fears among angry aging whites who are terrified of losing their so-called white privilege.  One need look no further than Ferguson, Missouri or sit a a criminal courtroom to see that minorities are not treated the same as their white counterparts.  A piece in Salon lays out additional signs that the pundit class has their heads up their proverbial ass.  Here are highlights:

In the wake of the Ferguson shooting, a recent Pew poll finds that 47 percent of whites believe that “race is getting more attention than it deserves,” with regards to the death of Michael Brown, while only 18 percent of African-Americans feel the same. Meanwhile, a similar Pew study found that whites are far less likely to see discrimination in the treatment blacks receive by the education system, the courts and hospitals. Such views are held by many Americans, who believe that “blacks are mostly responsible for their own condition.” Police killings of unarmed blacks are certainly the most visible manifestation of systemic racism, but data show that racism still manifests itself frequently in everyday life.

In America, race determines not just where someone lives and what school he or she attends, it affects the very air we breathe. Although many whites wish to believe we live in a “post-racial” society, race appears not just in overt discrimination but in subtle structural factors.

[A] cursory examination of major structural racial problems can give us a feeling for how far we still have to go
.
1) Education
Education is an important key to fostering upward mobility and alleviating inequality. However, schools today are becoming more segregated, rather than less segregated. At the peak of integration, 44 percent of black Southern students attended majority white schools. Today, only 23 percent do. This is particularly worrying because recent research by Rucker C. Johnson finds that school desegregation benefited black students, because it “significantly increased both educational and occupational attainments, college quality and adult earnings, reduced the probability of incarceration, and improved adult health status.” . . . At the college level, the situation is little better.

2) Wealth
There is a large racial wealth gap between blacks and whites in America, partially driven by income but exacerbated by racially biased housing policies (which will be examined below). A recent research brief by the Institution on Assets and Social Policy finds that the wealth gap between white families and African-Americans has tripled between 1984 and 2009. The recession has only exacerbated the gap, with whites losing 11 percent of their wealth between 2007 and 2010, while blacks lost 31 percent and Hispanics 44 percent.

3) Job Markets
Unemployment is particularly high among African-Americans, the result of both explicit discrimination and occupational segregation. . . . Occupational segregation, or the delegation of blacks to jobs with low upward mobility and wages, is rife.. . . . People of color are far more likely to rely on public infrastructure, and therefore suffer from cuts to public transportation. Decades of housing segregation have trapped African-Americans in jobless areas with badly understaffed schools.

4) Upward Mobility
Possibly the defining American attribute is the dream of upward mobility. Sadly, this tends to be more farce that fact — America lags behind other developed countries in measures of upward mobility. But recent research by Raj Chetty, Nathaniel Hendren, Patrick Kline, Emmanuel Saez, shows that levels of upward mobility vary across the country — and is strongly predicted by income inequality and racial segregation. . . . . Specifically, they note the importance of segregation, “areas that are more residentially segregated by race and income have lower levels of mobility.”

5) The War on Drugs
The socioeconomic realities discussed above cannot be divorced from the war on drugs: It is a war that is primarily fought against people of color in the country. One in 12 working-age African-American men is incarcerated; and while whites and blacks use and sell drugs at similar rates, African-Americans comprise 74 percent of those imprisoned for drug possession.

The most disturbing fact is that in almost all of these areas, we have actually seen previous progress eroded, even while we proclaim ourselves a post-racial society. It’s time to take an honest look at race in America. We probably won’t enjoy it. But we need it.

What ultimately drives racism is the inability of people - usually white conservative Christians - to see anyone who is different be it in terms of skin color, national origin or sexual orientation, as equally human.
Posted by Michael-in-Norfolk at Monday, August 25, 2014