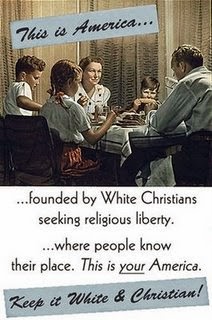 If one looks at the Tea Party, the majority of falsely named "Christian" family values organizations, and many main stream Republican elected officials the core of the agenda is to protect white privilege which these people believe to be under attack by those they deem "other" and who in their eyes are not "real Americans."   Those falling into the category of "other" range from blacks, Hispanics, gays, non-Christians, etc.  Basically, anyone who isn't a white conservative Christian.  The Family Foundation ("TFF") here in Virginia is a perfect example of the phenomenon: a lily white organization with a leadership descended from 20th century segregationists.  The only time TFF cares about minorities is when it is trying to dupe black pastors into acting as its water carriers like trained circus dogs attacking gays and other groups TFF despises (which is almost everyone).  A piece in Salon looks at this insidious virus afflicting American society.  Here are excerpts:

Painful recent events on the ground in Ferguson, Missouri — and the strongly divided national response to those events — offer us a chance to become aware of the ways we see race in America “through a glass, darkly,” and perhaps also the beginnings of a chance to see each other face to face, to know as we are known. Let me be clear that when I say “we” I am primarily addressing America’s white majority, to which I belong. We are the ones whose vision is occluded by the darkened glass of white privilege, and it’s up to us to do something about it. Black people can see white privilege pretty clearly, but from a different perspective, and it’s beyond their power to change it.

White privilege is a term that sometimes gets thrown around too cavalierly, especially when people are having a fight on the Internet and want to shut each other up. . . . . Recognizing white privilege does not mean that white people don’t get to express our views on controversial racial topics, or that we have to defer to whatever a person of color may say. It does mean, however, that we have a responsibility to be alert to advantages we may possess, whether as ordinary citizens on the street, economic agents or wielders of rhetoric that appears neutral rather than “racial.” By definition, it means that some of those advantages are things we don’t notice, or take entirely for granted.

But the most insidious power of white privilege, the albatross effect that makes it so oppressive to white people themselves, is the way it renders itself invisible and clouds the collective mind. It’s like a virus that adapts in order to ensure its own survival and perpetuation, in this case by convincing its host it isn’t there. So we see polls suggesting that large percentages of white Americans believe that racism is not a significant factor in Ferguson or law enforcement in general, that cops are just doing their jobs, and that whatever bad things may have happened once upon a time in our beloved country, they’ve been locked away in the dusty cabinet of history and don’t matter anymore. We passed the Voting Rights Act and exiled the Ku Klux Klan to the margins of society (or at least to websites with really bad graphics). Ergo, white privilege obviously doesn’t exist anymore.

Among the “childish things” we need to put aside, white people, is the idea that America’s tormented racial legacy belongs to the past. . . . . In the more paranoid formulation prevalent in the Fox News demographic (but not limited to it), this becomes the idea that the federal government has spent the last 50 years giving away money, housing, education and other “free stuff” to black people who don’t work or pay taxes, while vigorously grinding down the white man.

This kind of white privilege is a willful blindness, along with a passionate embrace of exactly the kind of aggrievement and victimhood that white people often claim to resent in others. It’s found in Sarah Palin and Sean Hannity, of course, but also among people like hipster über-troll Gavin McInnes, the co-founder of Vice, who wrote a piece not long ago explaining that racism, sexism and homophobia do not actually exist.

There is a much larger population of white Americans, I believe, who feel troubled by what they saw in Ferguson but are unable or unwilling to face the fact that it reflects a recurring historical pattern that has obviously not been exorcised, a pattern of power, privilege and domination in which they are complicit.Any white person who is being honest can understand this reluctance, and probably any other kind of person too. It’s a lot more comfortable to believe that equal opportunity has been pretty much afforded to all, allowing for some bumps in the road – or to believe that you yourself belong to the unfairly downtrodden and stigmatized group – than to consider the alternatives.

William Faulkner’s famous remark that the past is not dead, and isn’t even past, could not be more vividly illustrated than by the images from Ferguson: A black man shot dead in the street; angry African-American protesters facing impassive and heavily armed white police officers; tear gas, broken glass and the National Guard. But how to deal with these events that seem like nightmarish echoes of too many previous events? One way, the path of survival pursued by the virus of white privilege, is to detach each of these cases from history. Each of these inexplicably dead black men becomes an isolated phenomenon, with no reference to any discernible pattern.

That pathway remains highly seductive for white America, because it avoids any notion of collective or social responsibility and accesses the Calvinist myth of individualism that lies at the core of white American identity. A man makes his own fate or is elected by Providence – it comes to the same thing in the end – and if those young men and a distressing number of others met death in the street under unsettling circumstances, that can only have been their just deserts. Considering the possibility that they died because of a system of justice and law enforcement that skews heavily toward arresting, imprisoning and otherwise suppressing black and brown people, and that that system is itself embedded within much larger cultural and historical patterns, raises a lot of painful questions.

An entire right-wing ideological empire remains devoted to convincing white people that benefit-sucking African-Americans and job-stealing Latino immigrants are somehow to blame for their downward trajectory. White privilege is the solvent used, throughout American history, to dissolve multiracial coalitions of working people, and the drug used to brainwash whites into making common cause with the class of CEOs, financiers and landlords. Kicking that drug habit is the only way white America can ever set itself free from the past.