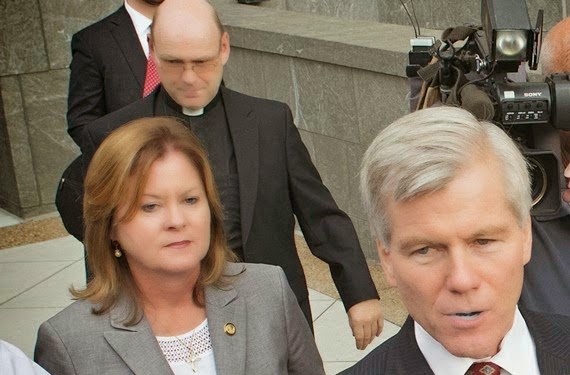 I guess it was bound to happen given the lunacy that now is the norm within the Republican Party as a whole and the Republican Party of Virginia in particular.  What am I talking about?  The reactions from the reality free folks at Bearing Drift, a conservative Virginia GOP blog , and the all too typical anonymous commentators who attack me yet lack the guts to reveal their own identities.  Insanity and cowardice seem to be the norm for these folks.


At Bearing Drift there is a tirade under the headline "Virginia Democrat Bloggers Spew Homophobic Hatred" that accusing Democrats and "liberal bloggers" - which seemingly includes me - of being anti-gay because notice has been taken of Bob McDonnell's hypocrisy when it comes to (i) the "sanctity of marriage" and (ii) the acceptability of gay sex.  In 2003, McDonnell led a lynch mob of Virginia Republicans against then circuit court judge Verbena Askew over unsubstantiated claims that she had sexually harassed another woman.  McDonnell's crusade cause Askew her seat on the bench and first earned McDonnell the nickname "Taliban Bob."  It was during that lynch mob circus that McDonnell was asked if he had ever violated Virginia's sodomy statute to which he responded "not that I recall."    Here some of the drivel:

It’s sad when Democrats who pretend to care about their supporters show their true colors. That’s what Lowly at Blue Virginia did today, launching a hate-filled post targeting a priest who visited a “bawdy place” in the 1990s with a 41-year old man because he had the gall to allow Bob McDonnell to stay in his rectory during Obama’s political trial against him.

But it does show you an insight into the liberal extremist mind. Democrat bloggers, especially Lowly, must not really like gay people. They need their votes, and the fact that they don’t like religion makes gay people social “brothers in arms” with hatemongers like Lowly, but in reality they only use gay people to shore up their own power.

Note how McDonnell's criminal indictment is described as "Obama's political trial against him."  These folks are insane.

A cowardly comment on this blog - which will not be given the honor of being published attacks me in part as follows:

Dredging up an incident from a dozen years ago and making the priest the bad guy just seems so petty. He was not even convicted; the charges were dismissed.

Moreover, the writer turns the situation into one of merely being in a park after hours.  The cretin misses the point that the issue is not the priest (although he did plead guilty in a plea deal which is not what one does if there isn't a good chance of conviction) but rather McDonnell's hypocrisy.  Taliban Bob only wants to know gays when they can help him throw his wife under the bus.  He certainly had other option as to where he could stay if he found the marital home to chilly. .
Posted by Michael-in-Norfolk at Wednesday, August 27, 2014